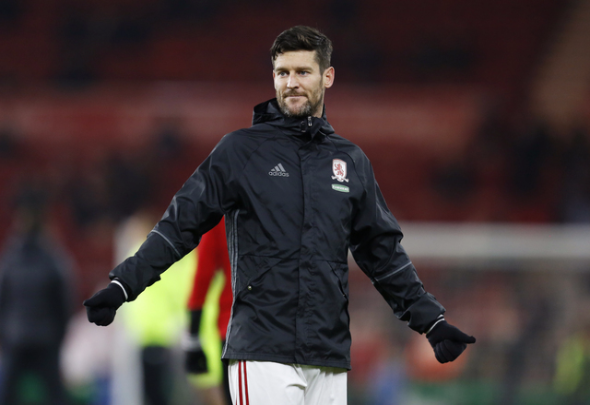 Veteran striker David Nugent is in line to make his debut for Derby against Leeds in Friday’s Championship clash, according to a report.

The BBC Sport website claim that Nugent could play at Elland Road days after joining from Middlesbrough for £2.5million.

Leeds were reportedly one of the clubs interested in prising the former England front man from Boro but will now be facing a player who has a fine goals record in the Championship.

The 31-year-old former Preston and Leicester striker, who was handed his single England cap in 2007, has scored 103 goals in 308 matches in England’s second tier and also weighed in with 48 assists.

Meanwhile, Leeds are sweating on the fitness of centre-back Liam Cooper ahead of the league clash as manager Garry Monk prepares to reshuffle a defence that has been the bedrock of his team’s promotion challenge.

Left-back Charlie Taylor has been ruled out after failing to recover from an achilles problem, while Pontus Jansson is suspended after his 10th booking of the season against Cambridge on Monday night triggered an automatic two-match suspension.

? @GarryMonk “We are very hopeful Liam Cooper will be available, we will know more by the end of today”

Additionally, winger Hadi Sacko picked up a knee problem that forced him out of Monday’s match, according to the Twitter account of Yorkshire Evening Post journalist Lee Sobot.

The reporter quoted Monk as saying Sacko “was always going to miss the Cambridge game” and he is “hopeful” the speedy wide man is fit to face Derby.

Hadi Sacko had a knock on his knee but was always going to miss the Cambridge game anyway. Monk hopeful he’s fine for Derby game #lufc

Leeds go into the clash at Elland Road aiming to secure their sixth win from seven matches in all competitions and build on their excellent start to the new year.

Monk will be aware that Derby beat his side 1-0 in the reverse fixture in October and they are pushing hard for promotion under Steve McClaren.

The east Midlands side are seventh in the Championship with a haul of 40 points from 25 league games, five adrift of high flying Leeds, who have 45 points and are just seven points off Newcastle in the second automatic promotion spot.

In other Leeds news, Monk has made a major January transfer admission as he revealed this is the midfielder deal he wants to seal this month.