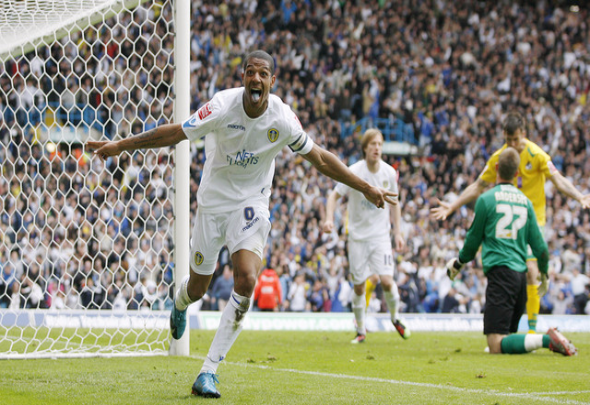 Jermaine Beckford has been released by Championship outfit Preston North End after it was confirmed he would leave at the end of his contract – and Leeds fans on Twitter want him back.

Preston confirmed on their official website that Leeds favourite Beckford had been released alongside Anders Lindegaard and Clive Smith will all leave the Lilywhites.

The 33-year-old signed for Leeds in 2006 from non-league outfit Wealdstone, and fired the Yorkshire giants back into the Championship with 84 goals in 147 league and cup outings.

His biggest goal came in the 2010 FA Cup third round on January 3, as he controlled a long ball to score at Old Trafford and knock arch rivals Manchester United out of the cup with a 1-0 win.

Beckford moved to Everton at the end of that season, where he scored eight Premier League goals before moving to the likes of Leicester, Bolton and then Preston.

Leeds fans have urged their club to sign Beckford on Twitter following his release, with many claiming that he would provide strong back-up to first-choice striker Chris Wood.

We should sign him just to warm up in front of the Kop. He'd love that ! #LUFC

Beckford back to Leeds to partner Wood? 😉 #lufc https://t.co/fvfpvBIk1R

This season, Beckford has managed just four Championship starts and 18 appearances in total, scoring only once for Simon Grayson’s side in England’s second tier.

In other Leeds transfer news, this transfer battle is all but done with a fee of £4million agreed, according to a report.