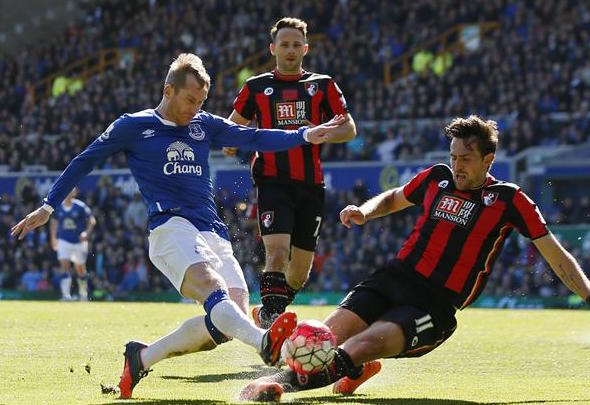 Tony Hibbert has spoken publicly of his devastation at learning of his exit from Everton from the club website.

The 35-year-old defender was released in June after 15 years’ top-flight football with the only team he ever played for following the Merseysiders’ decision not to offer him another contract.

A one-time first-team regular, Hibbert struggled with injuries in the later years of his career at Goodison Park and made just one appearance as a substitute last season.

His chances of being handed another deal with Everton were slim but the right-back has broken his silence to express his dismay at the manner of his departure after 25 years with the club.

“I was in Formby with my dad and brother when my wife Samantha rang to say she’d been getting text messages from friends that I wasn’t being retained,” Hibbert said to MailOnline. “It was on the [Everton] website.”

“I couldn’t believe it so I rang a friend at the club to check. They said, ‘Tony, I honestly don’t know why nobody has spoken to you’. I contacted Leon and he was in exactly the same boat.

“I won’t tell a lie, I was really hurt. Surely someone at the club should’ve realised it wasn’t right. I’d rather have been told at any point during the season there wouldn’t be a contract so I’d have a chance to plan my future and say a proper farewell.

“No player deserves that whether they’ve been at a club for five minutes or 25 years.”

Hibbert says that it’s indicative of what he sees as a changing culture at Everton from the one that he came to know during his time as a senior-level player.

“In what other job would someone be let go or fired without a senior manager talking and explaining what was happening?” Hibbert told the Mail. “I never got that and I honestly don’t know why. I didn’t get the chance to properly say goodbye to the fans.

“Every contract I had at Everton, I never questioned it or demanded more money. I have never kicked up a storm even as a kid. But since David Moyes left in 2013, I have noticed the club hasn’t got the same feeling.

“The People’s Club, it’s no longer that. It’s a ruthless, horrible business and a lot of good people have gone.

“I understand a new manager wants to work a different way but it is a dog-eat-dog culture inside the club now. People are only looking out for themselves.

“Bill used to text me good-luck messages as a player. But I’ve not heard from him now. It’s hard to blame only him because of his own issues but you’d like to think there are other people who know how to do the right things.”

In other Everton news, a £17million target hands in a transfer request, while his coach backs him to score twice as many goals as Jamie Vardy.