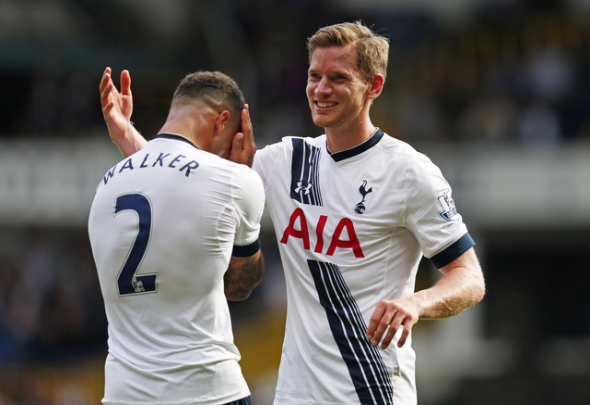 Tottenham should make two changes to their side when they travel to the Etihad Stadium to take on Manchester City at the weekend.

The injured Jan Vertonghen and Eric Dier should be replaced by Kevin Wimmer and Son Heung-Min as Mauricio Pochettino should field a 4-2-3-1 formation.

Spurs beat West Brom 4-0 with ease during their last Premier League encounter, with Pochettino playing three at the back.

However, since the injury to the important Vertonghen, the north London club should opt to field a straight back four.

Centre-back Toby Alderweireld should lead the defensive line, alongside 24-year-old Wimmer, who is more than capable of partnering the Belgian in a crucial clash.

The ever dangerous duo of Kyle Walker and Danny Rose need to start as full-backs as their energy, attacking intent and defensive abilities plays a huge part in how Tottenham perform.

Son should play out on the left as his ability on the ball can be a threat to any side and his work rate going back and forward would play a huge part for the away team.

Furthermore, Christian Eriksen should be deployed on the right and should be given the freedom to roam into the middle and control the game.

The in-form duo of Dele Alli and Harry Kane must start, with the latter hitting a hat-trick against the Baggies last time out.

Alli’s movement and link up play with Kane could be crucial as to whether the north London club grabs that all important winning goal against Pep Guardiola’s side.