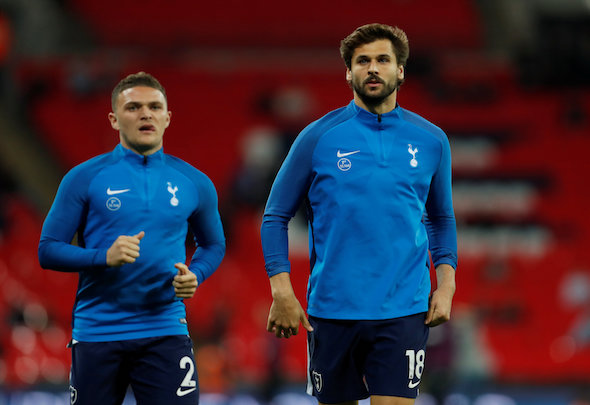 Tottenham supporters have expressed their anger and disappointment towards summer signing Fernando Llorente on social media following his performance against Manchester United on Saturday afternoon.

The 32-year-old started on the substitutes bench for the match at Old Trafford despite talisman Harry Kane being ruled out of the encounter.

The striker replaced Heung-Min Son just past the hour mark but he failed to make the desired impact for the visitors.

United substitute Anthony Martial turned out to be the match winner, making the most of poor Spurs defending and finishing past fellow countryman Hugo Lloris.

The result means that Jose Mourinho’s side are now three points ahead of Spurs and the North London club have failed to win at Old Trafford since the 2013-14 campaign.

Despite only featuring for the last 30 minutes, Llorente received some criticism from his own fans on social media.

Alli and Eriksen didn’t do enough going forward today. As for Llorente, a few touches in Madrid aside, he does not look good #COYS #THFC

Sell Llorente, n'koudou and Janssen
Buy:
Barkley
Zaha
(A fast striker who gets in behind)
Kluivert
Goretzka

I thought Llorente was a good signing… not sure sure how or if he will ever fit into our system now.

Llorente literally cannot, does not, will not run #THFC

The Spanish striker has made nine appearances for Spurs this season but he has still failed to provide a goal or assist in all competitions.

Tottenham have now suffered back-to-back defeats in a week following their 3-2 loss against West Ham United in midweek in the Carabao Cup.

In other Tottenham news, the club are set to scout an international midfielder this weekend.