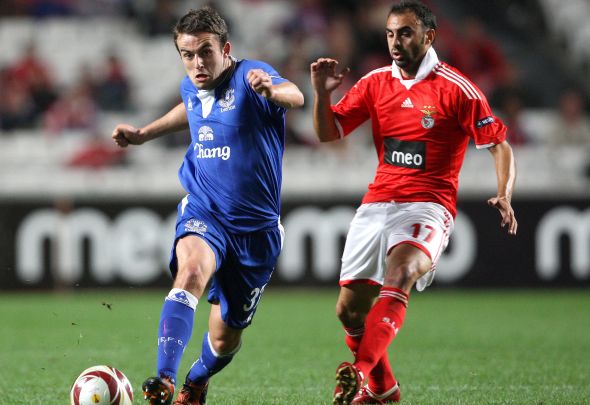 Everton have re-signed midfielder Jose Baxter after chairman Bill Kenwright gave the green light for him to be handed a career lifeline.

Baxter is to make a surprise return to Goodison Park after being offered a 12-month contract when his drugs ban ends in the summer.

The 24-year-old, who is a product of the Everton academy and is the youngest to have played for the club, having made his debut against Blackburn in August 2008 aged 16 and 191 days, is currently serving a year-long suspension from football.

But he failed to live up to his early promise and was playing for League One club Sheffield United when testing positive for traces of cocaine in February last year after a night out and was subsequently banned by an FA panel in August.

However, Everton’s long-standing chairman Kenwright came up with the idea, in alliance with the club’s Under-23s manager David Unsworth to integrate Baxter back into the Goodison set-up.

“I’m speechless,” said Baxter, as quoted by the Times. “Not many people get a second chance and here’s me with a third chance.”

Baxter will return to Everton’s Finch Farm headquarters for pre-season training on 1 July when he will be assigned to Unsworth’s Under-23s squad. Depending on his progress, he could move up to Ronald Koeman’s first-team set-up.

“As soon as he comes through the gates of Finch Farm in July, he will be treated like an Under-23 player and we work very, very hard,” Unsworth said to the Times. “It is up to him and down to his football performances. Nothing else.

“Jose will start with me and the under-23s. We can play three older players so that is not an issue. Then it is up to him.

“He will be given the same opportunities as everyone else. If that means he moves on to a Championship club or a League One club later on, that will be down to Jose.

“We want to help because that is the sort of club we are. He is one of our own, but I have said to Jose, in no uncertain terms, that this is your last chance.”

Baxter’s career went of the rails after he rejected a contract at Everton in 2012 because he wanted regular first-team opportunities.

The midfielder ended up at Oldham Athletic, after a trial at Crystal Palace, before moving to Sheffield United, for whom he scored at Wembley in an FA Cup semi-final in 2014.

He has spent most of his career in the lower divisions, racking up 150 appearances in League One, but only seven in the Premier League.

Baxter, who is an attacking midfielder, has an excellent scoring record in the third tier, netting 38 goals as well as supplying 18 assists in the division.