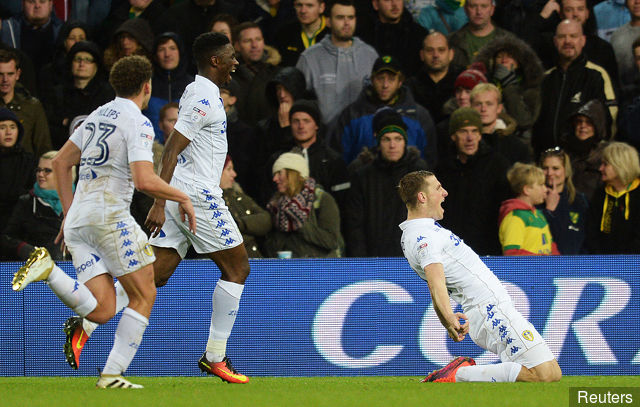 Chris Wood is among four Leeds stars who will play no part in Sunday’s FA Cup fourth-round clash against Sutton United, according to a journalist at the match.

But first team sextet Stuart Dallas, Luke Ayling, Hadi Sacko, Kalvin Phillips, Ronaldo Vieira and Kemar Roofe were all ready to play some part in the Sunday afternoon showdown, which kicks off at 2pm.

Hay revealed the identity of many of the squad members for the televised clash at Gander Green as non-league Sutton aim to secure a giantkilling win on their 3G astro pitch.

#lufc squad is here. Likes of Jansson, Bartley, Wood, Hernandez not among them: pic.twitter.com/znxRn59dZJ

Dallas, Ayling, Sacko, Phillips, Roofe, Vieira all out there. #lufc

Garrry Monk admitted at his pre-match media conference on Friday that he will rotate his squad and give chances to fringe players as the club’s priority is maintaining their promotion push.

It is little surprise that Wood, Jansson, Bartley and Hernandez have been omitted as they are arguably the four most important players in Monk’s revitalised side.

Leading scorer Wood has struck six times in the last four matches and his haul of 20 goals this season makes him one of the leading marksmen in the Football League.

Only Newcastle’s Dwight Gayle, who has struck 20 times, has scored more than Wood’s 17 Championship goals this season.

Leeds are flying high in the Championship and won their sixth league match out of eight on Wednesday night when they beat Nottingham Forest 2-0 to climb to third place.

With Charlie Taylor once again ruled out on Sunday due to injury, Monk is likely to once again use Gaetano Berardi as a makeshift left-back, a role he has filled impressively for a period of over a month while the Elland Road academy product has been sidelined.

Taylor has missed the last seven matches after breaking down during Leeds’ pre-Christmas win against Brentford on 17 December.

It was initially expected to be a minor problem but the academy product has now been absent for six weeks.