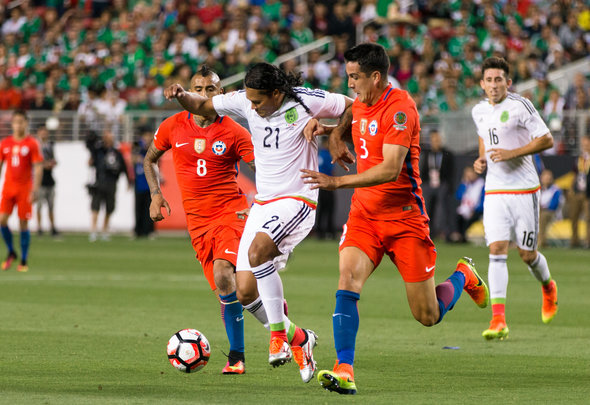 Kris Boyd has slammed big-money Rangers signing Carlos Pena in the Scottish Sun for going missing since joining the club this summer.

The Mexican midfielder has been restricted to just a single 25-minute substitute appearance for the Glasgow giants despite not being classified by Pedro Caixinha as injured.

Ex-Rangers striker Boyd, who is now at Kilmarnock, is convinced that the Ibrox faithful will be miffed that Pena, 27, has barely been seen since his arrival.

“The one big question I have right now is ‘Where is Carlos Pena?’,” Boyd wrote in his weekly Scottish Sun column.

“For those who can’t remember who he actually is, he’s the Mexican midfielder Rangers paid over £2million for in the summer.

“By all accounts he’s on big wages at Ibrox, having signed a three-year contract that basically has him in with the bricks.

“I’m sorry, but the Rangers fans have a right to ask what on earth is going on there.

“They’ve got a right to know why Pena has hardly kicked a ball.

“At 27, he should be at the peak of his career and playing every week. But he’s literally nowhere to be seen.

“I just cannot get my head around it and find it utterly staggering that he’s virtually gone missing.

“Alarm bells must be ringing out loud behind the scenes at the club. If not, they should be.

“Is he giving Rangers everything he’s got? Is he doing all he can to get into the team and help out?”

Pena is one of 10 new players signed by Rangers this summer, with the latest being the capture of winger Aaron Nemane on loan from Manchester City.

The two to have made the biggest impact so far are Portugese defender Bruno Alves and Scottish central midfielder Graham Dorrans.

Indeed, Alves is in such fine form that he has been named in Portugal’s squad for their World Cup double header against Faroe Islands and Hungary.