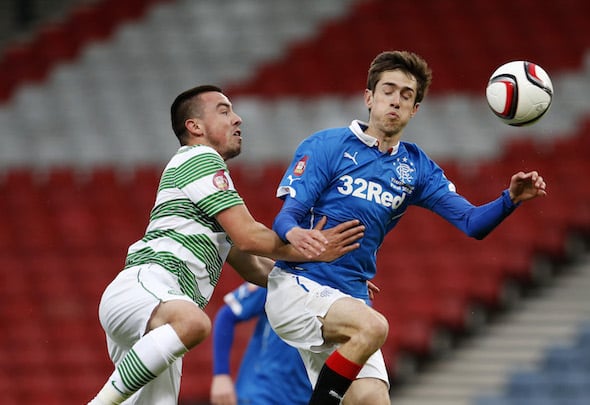 East Kilbride star Sean Winter has slammed proposals to introduce Old Firm Colt teams in the SPFL from next season and claimed it “doesn’t bring any benefit” to Scottish football as a whole.
The ambitious plans would see Rangers and Celtic field Under-21 sides in the lowest tier of the professional set-up in Scotland, League Two, as they look to close the gap between performances at youth level – where Scottish sides regularly perform well – and the senior set-up.
Colt teams have been permitted in the Scottish Challenge Cup for the last two seasons with every Premiership side fielding an Under-20 side in the competition.
Winter insists there is no benefit to the plan and thinks allowing the Old Firm to parachute a Colt team into the league would “open a can of worms.”
“Just because they are Celtic and Rangers doesn’t mean they should be able to throw a team into League Two,” Winter said, as quoted by the Daily Record.
“East Kilbride FC have put a lot of time and effort to get us into a position where we can get into League Two, so I’m strongly opposed to this.
“It doesn’t bring any benefits to Scottish football as far as I’m concerned.
“If this plan gets accepted then it will open up a can of worms.”
East Kilbride currently play in the level below League Two – the Lowland League – and are in the hunt for promotion to the senior ranks for the first time in their short history.
The plans are due to go in front of SPFL clubs later this season with 11 of the 12 Premiership clubs and 23 of 30 clubs in the remaining three divisions needed to vote in favour for it to get the go ahead.
In other Rangers news, fans have reacted after this midfield dynamo underwent a medical to complete his switch.
We’ve launched a << BREAKING NEWS FEED>> exclusively for your club. ‘Like Us’ on Facebook by clicking here if you want 24/7 updates on all Rangers breaking news.