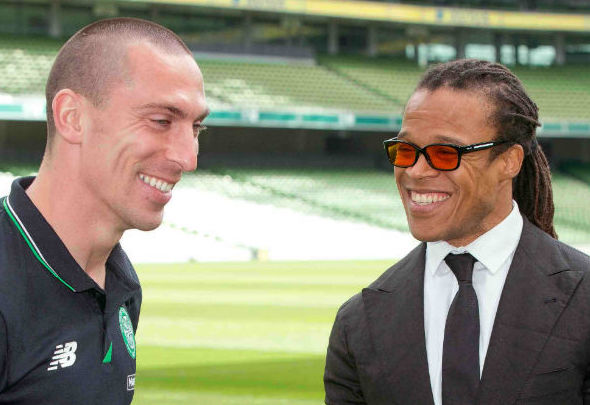 Edgar Davids has claimed Celtic are “nothing” without Rangers as he welcomed the top-flight return of the Old Firm derby next season.

Rangers’ promotion to the Scottish Premiership following a four-year absence will throw the spotlight back on to the league next season following a spell in the doldrums.

Mark Warburton’s side showed there might be a shift in the Old Firm landscape when they knocked Celtic out of the Scottish Cup in a pulsating semi-final clash earlier this month.

Dutch great Davids is convinced that such close contests will galvanise both sides and reinvigorate Scottish football.

Asked about Celtic when he was working as an ambassador for Barcelona at the launch of the International Champions Cup match between the two clubs in Dublin in the summer, Davids offered a typically outspoken view.

“Without Rangers, they are nothing,” said the 43-year-old former midfielder to the Glasgow Evening Times. “You need that rivalry. You need black and white, something old fashioned like a very old rivalry.”

Having played for Ajax, AC Milan, Juventus, Barcelona, Inter Milan and Tottenham during his distinguished career, Davids understands the importance of big matches to a club.

“They are what you live for,” he told the Glasgow Evening Times. “When big teams play each other, you automatically want to raise your game. Of course, you want to see what level you’re at and you know you have to step up your game when you are playing big teams.”

He has welcomed the prospect of Old Firm rivals Celtic competing against Rangers four times in the Scottish Premiership next season and has predicted it will galvanise both clubs.

“I don’t watch a lot of television,” Davids told the Glasgow Evening Times. “I am working from morning ‘til night on my fashion label, Monta Soccer. I’m in the office or I go to factories to watch and make the samples.

“Sometimes I watch the games and I saw one glimpse that Rangers are going to be up in the top league again, so I was happy and delighted for them. They are a big club. It also helps Celtic that they are back. You want those matches. They put the spotlight back on Scottish football.