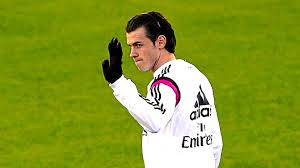 COMMENT | By Spain correspondent Miguel de Souza
With a world-record transfer fee comes an almighty burden and Gareth Bale is bearing it with all the force of a lead weight.

He became the instant scapegoat for Real Madrid’s Champions League exit after failing to accept seven reasonable chances to score the goal that would have taken the world’s most demanding club into the final for a second consecutive year.
This came after Carlo Ancelotti told his agent Jonathan Barnett to pipe down for making the somewhat dubious claim that it was Bale’s team-mates and not the player himself who was to blame for the downturn in his form.
Bale is going through a horrible patch. That is without question. The problem for Real is that it has coincided with their own prolonged fall from the elevated heights of last winter when they set a new world record for consecutive victories.
It is in stark contract to a year ago, when the finest product of Wales football since John Charles was the darling of the Real supporters, scoring a Champions League final goal and dazzling everyone with a sensational winner in the Copa Del Rey final.
With the curtain about to fall on his second season at the Bernabeu, is it time for Bale to end his Spanish adventure and return to the Premier League? Are there buyers ready and able to pay the kind of fee that would match the £86m paid by Real in the summer of 2013? Does Bale have anything still to prove at his adopted home? No, yes and yes. In that order.
If Bale were to high-tail it back to the comfort zone of England, it would represent a cop-out. He would be regarded as only a middling success in Spain when he has the attributes to be a resounding one.
The 25-year-old and his representatives know he would not be short of Premier League suitors. Chelsea and the two Manchester clubs would be falling over themselves to offer Bale a kingpin role and royal rewards. Players that possess his pace, athleticism and match-winning qualities are rare gems.
On the face of it, Bale’s statistics in the famous white shirt are pretty healthy. In all competitions this season, he has contributed 19 goals and 11 assists in 48 club games. In 2013-14, he weighed in even more impressively with 22 goals and 16 assists from 36 matches.

Yet the sense would be that Bale could have delivered so much more to Real. Turning 26 in July, he is entering the peak years for a player of his type.
If he stays, he will have the opportunity to score the goals and deliver the magic moments to enter Real folklore. In time perhaps, he will develop more of a swagger to his game and be able to stamp the force of his personality on matches in the same way as Cristiano Ronaldo. The Portugese record-annihiliator, by the way, has already passed 30. He will not be around to overshadow Bale forever.
Encouragingly, the Welshman was upbeat and defiant in the aftermath of Wednesday night’s disappointment as he assessed his own recent contribution.
“There have been some ups and downs but I think I’ve played well,” he said. “What doesn’t kill me makes me stronger and I’ll learn from this season and take it on.”
“I’ve maybe not scored as many important chances as I’d like but my general play has been good. My finishing is not as good and that’s something to work on for next year.”
The decision to stay-or-go could be taken out of Bale’s hands by a club whose ruthlessness in the summer market is legendary.
The player himself should make his stance clear. Learn from a difficult few months and come back in July ready to set the world on fire next season.