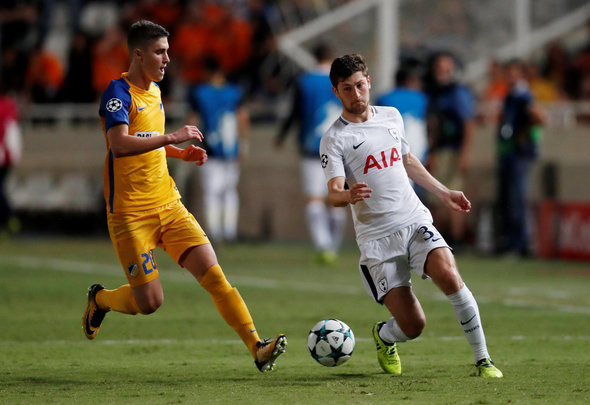 Tottenham’s Champions League clash against APOEL Nicosia on Wednesday night will see a series of scouts arrive from across Europe to watch visiting player Ronald Sallai, according to a report.

The Daily Mail claims that multiple European giants have instructed their recruitment experts to jet into London with the mission to watch Roland Sallai as Premier League are also said to be keeping tabs on the APOEL wonderkid.

It is understood that the Hungary international is hoping to attracting enough potential suitors to secure a move away from the Cypriot side, who will be aiming to get a result against Spurs on Wednesday in order to try and progress into the Europa League knock-out stages.

The report adds that Bundesliga sides will be represented in the crowds to watch Sallai, 20, in action.

The Daily Mail claims that the attacking midfielder is being widely dubbed as the next Paulo Dybala, due to the shared attributes to the Juventus star.

Sallai has made 15 appearances across all competitions this season, scoring five goals and supplying two assists.

It would be interesting to know if Tottenham have their own man in the stands to keep an eye on Sallai playing against them. Having him there at Wembley stadium would be great to see how the Hungarian international can perform against Premier League sides and on a cold night in the British Isles. Anyone who is dubbed as the next something has usually done something right to deserve that tag but it’s not always health to start comparing young talent otherwise they start to believe their own hype. Sallai is best to just ignore the speculation and do his talking on the pitch. It won’t be long before surely someone comes in and snaps him up.

In other Tottenham news, Jamie Redknapp has slammed Spurs for this “huge mistake” in the summer transfer window.