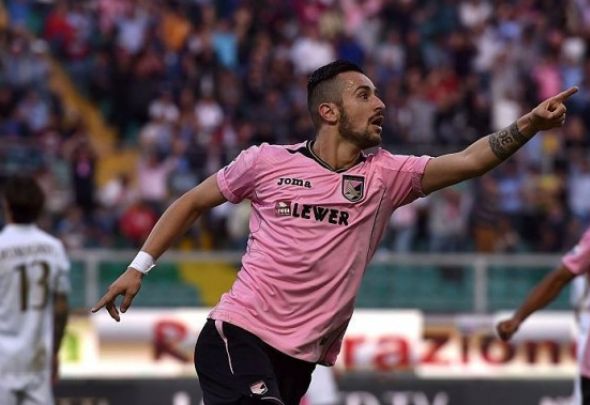 Everton are set to re-launch their pursuit of Palermo striker Ilija Nestorovski, according to a report.

Spanish news outlet Estadio Deportivo claims that the Merseysiders will battle with La Liga giants Atletico Madrid and Sevilla for the Macedonian international.

Nestorovski, 27, is also on the radar of Fiorentina and Lazio after tearing up Serie A in an impressive series of performances earlier this season.

Italian news website Calcio Mercato had previously reported that the Toffees were looking to sign the 11-times Macedonian international in January.

Estadio Deportivo claims that Palermo’s president would want up to £16.8million for their star striker.

This season, Nestorovski got off to a flying start after he bagged seven goals in 13 league starts.

His goals have dried up since but he still has a total of 10 goals in 33 appearances across all competitions, as well as one assist.

Palermo would be set to make a massive profit on the striker, if they can sell him, after they signed him from Croatian club Inter Zapresic last summer for £420,000.

Everton will be in the market for a new striker in the summer with Romelu Lukaku expected to leave Goodison Park in order to pursue his dream of playing in the Champions League.

The 23-year-old has been continually linked with a move to Chelsea.

Everton definitely need to sign a new striker in the summer but they cannot take a chance on someone who seems to be a one-season wonder. His early-season form was brilliant but that has died down now and so should have Ronald Koeman’s interest. Lukaku has been pretty much priceless to the Merseyside club over the past few years so they really need to get his replacement right and cannot go for a cheaper option in order to make a tidy profit. Europe has a plethora of fine striking options and Koeman really needs to look elsewhere because this deal could be a huge waste of money.

In other Everton news, this is how much the club would have to pay for this 27-year-old star.