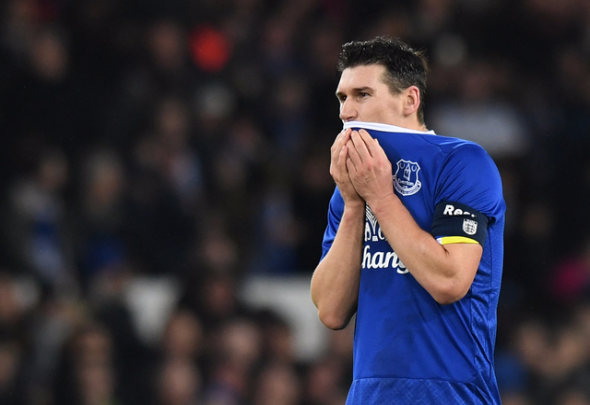 Everton duo Idrissia Gueye and Gareth Barry have been named in talkSPORT’s dirtiest Team of the Season.

The popular radio station picked players that have been inside the referee’s book on a number of occasions this term and those who have taken it to the “next level”.

Both Gueye and Barry were selected in the middle of the park as they have accumulated 11 yellow cards each during this campaign.

Midfielder Gueye is a defensive-minded player and has had a successful season in Merseyside following his summer move from Aston Villa.

On the other hand, the experienced Barry being selected in the team would not surprise many as he is known to pick up yellow cards on a regular basis throughout his career.

They were joined by Crystal Palace forward Christian Benteke and Chelsea’s Diego Costa, who have seen yellow on ten and nine occasions this term respectively.

From the list selected, Watford defender Jose Holebas has been in the bad books of the referee the most times (14) as he was joined by his teammate Miguel Britos (six yellows and two red cards).

Nonetheless, both Gueye and Barry will be looking to take to the field for the final time this season when Ronald Koeman’s team play Arsenal on Sunday.

The Merseyside club will be looking to stop the north London club from finishing in the top four, with Liverpool hoping to secure a Champions League place in front of them.

In other Everton news, Danny Murphy has a message for fans as the Ross Barkley saga rumbles on.