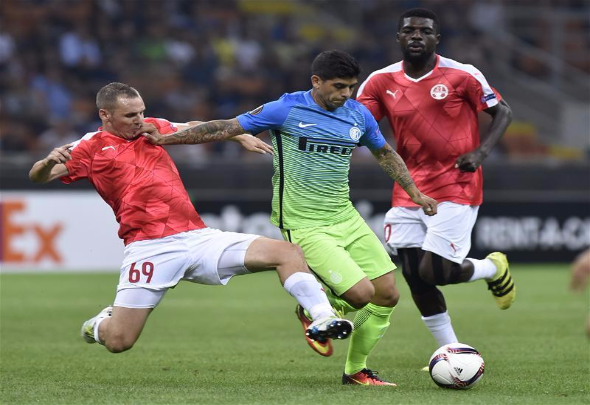 Everton have opened talks with the agent of Inter Milan midfielder Ever Banega, according to a report.

The Mirror has claimed that the 28-year-old is valued at just £8million after being put up for sale by the Serie A giants.

The report states that the Blues have been watching Banega “for months”, but they will also face competition from teams in France and Spain for the Argentina international with 47 caps to his name.

Banega is contracted at Inter until 2019 and has played in 16 fixtures for his club this season.

However, the club are currently placed in 11th and are massively under-performing given their status in Italy.

Everton are also enduring a bad run of form in the Premier League, which has seen them win just one of their last 10 fixtures.

A good run at the start of the season has seen the Toffees remain in ninth place and they will be keen to ensure that the current form ends as soon as possible.

Manager Ronald Koeman added five senior players to his squad in the summer after moving from Southampton.

He will now be looking to bring in further additions to the side, which is expected to finish comfortably in the top half.

Banega would be a fantastic addition to the Everton team. Koeman knows all about the qualities of the midfielder, who he splashed out £16million for in January 2008 when at Valencia. Banega has enjoyed most of his success in Spain, winning the Copa del Rey with Valencia, as well as the Europa League twice with Sevilla. He was also named in the Europa League squad of the season in 2015 and 2016 and is a hugely talented individual. £8million is nothing to most Premier League clubs in the modern era and the Toffees must simply do all they can to obtain the Argentine.

In other Everton transfer news, the Toffees are in talks to sign this proven Premier League midfielder.