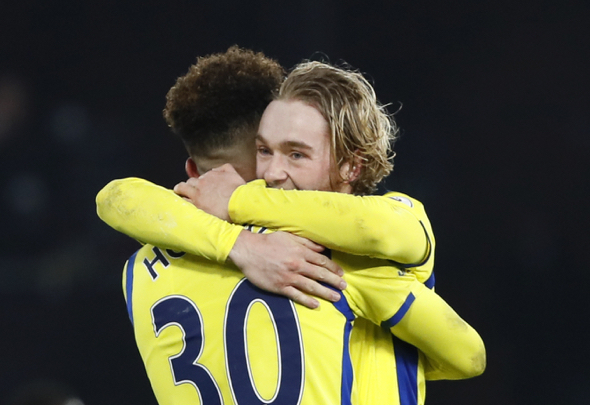 Everton are expected to make two changes to their line-up to face Manchester United on Tuesday night.

The Toffees face a short trip to Old Trafford after their disappointing loss at Liverpool on Saturday.

There are no fresh injury concerns for Ronald Koeman, but Morgan Schneiderlin and Aaron Lennon are still ruled out of contention.

That means that Koeman will most likely shuffle the pack in order to ensure his key players are at optimum fitness.

Gareth Barry can be expected to return to the fray in the place of Tom Davies.

The teenager has enjoyed a brilliant season at Goodison Park but had a bit of a stinker in the Merseyside derby and was subbed off by Koeman in the 66th minute.

Barry hasn’t been used too much throughout the campaign but the experienced midfielder is likely to offer a calm influence on what is a young Everton side.

The other potential change could see Dominic Calvert-Lewin dropped in place of Kevin Mirallas.

Calvert-Lewin was also off the boil against Liverpool and might not be trusted to play two high-profile games in such a short period of time.

Mirallas is used to these types of matches and only played in the final stages of the Merseyside clash, so he can be expected to return to the side.

Joel Robles should keep his place in goal with a back three of Phil Jagielka, Ashley Williams and Matthew Pennington in front of him.

Idrissa Gueye is expected to join Barry in the centre of midfield as Leighton Baines and Mason Holgate should start again as wing backs.

Ross Barkley and Romelu Lukaku have been the stories of Everton’s campaign and are expected to retain their respective positions.

The Toffees can move up to fifth place, above Manchester United and Arsenal, with a win on Tuesday night if results go their way.

However a loss might mean that West Brom can narrow the gap below them to just three points as they take on Watford.

In other Everton news, Man United have dealt the Toffee’s chances with a blow with their latest update.