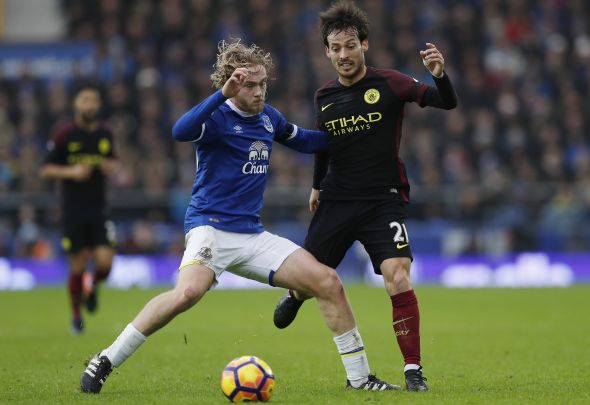 Everton boss Ronald Koeman is expected to name three changes to the side that drew 1-1 with Manchester United when his side take on Leicester on Sunday.

Ashley Williams will miss out through suspension following his red card against Manchester United, meaning a start for Matthew Pennington is likely.

Morgan Schneiderlin is fit again and is expected to replace Gareth Barry in the starting line-up.

Young star Tom Davies has had a tough couple of games against Liverpool and Manchester United, so Koeman may prefer to drop Ross Barkley into a midfield three and give Enner Valencia a run out.

Joel Robles should remain in goal after a solid performance at Old Trafford, while experienced head Phil Jagielka will likely retain his spot at the heart of defence.

Mason Holgate and Leighton Baines are expected to start in the wing-back roles.

Idrissa Gueye will likely start in midfield, though with different partners, as Schneiderlin returns and Barkley drops back in search of some form.

Kevin Mirallas is expected to continue to occupy one of the attacking midfield roles, while Everton’s star man and the Premier League’s top scorer Romelu Lukaku will almost certainly start up top.

A win for Everton could see them go level on points with United, depending on Jose Mourinho’s side’s result.

A win for Leicester could catapult them into the top half for the first time this year.

In other Everton news, this 19-year-old Everton star has made a big commitment to his future.