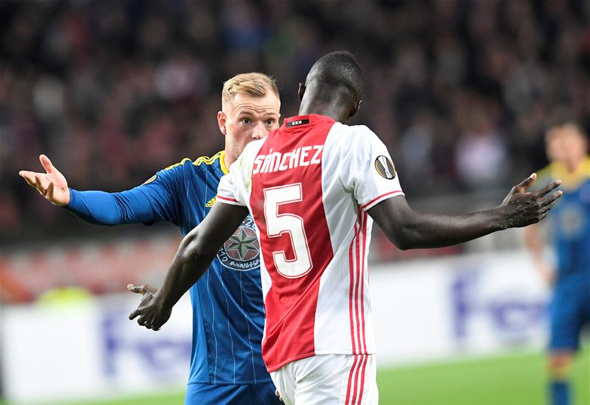 Everton missed out on signing starlet Davinson Sanchez because of work permit restrictions, according to a report.

The Toffees were unable to sign the youngster because he had not played enough games for his national side to meet the work permit requirements needed to join the Premier League.

Bruins Slot, who is currently working as a transfer adviser for Ajax, revealed he has spoken with Koeman many times about the player.

The Ajax scout has claimed Barcelona, who are also monitoring the player, are lucky that he did not join Everton and urged the Catalan club not to hesitate any longer.

“Barca are lucky because [if not for the work permit issue] Davinson Sanchez would already be playing at Everton under Ronald Koeman, who is excited about the guy,” he said, as reported by IBTimes.

“Barcelona’s luck is that he has not yet played sufficient games for the Colombian national team to meet the requirements for a club in the Premier League.”

The Ajax starlet was heavily linked with a move to Barcelona this summer but opted to join the Dutch side after impressing for Colombian outfit Atletico Nacional.

Sanchez started the season in the Ajax reserve squad but has since broke into the first team, making 11 appearances and scoring two goals from left-back in the Eredivisie.

Bruins Slot has worked alongside Koeman at a number of clubs including Benfica, PSV Eindhoven, Valencia, AK Alkmaar and Ajax and is believed to still have a strong relationship with the Everton manager.

Sanchez has been compared to the likes of Gerard Pique and Carlos Puyol due to his ability to play out from the back and his composure on the ball.

In other Everton transfer news, Memphis Depay could join the Blues on loan from Manchester United after struggling to make the starting XI under Jose Mourinho.