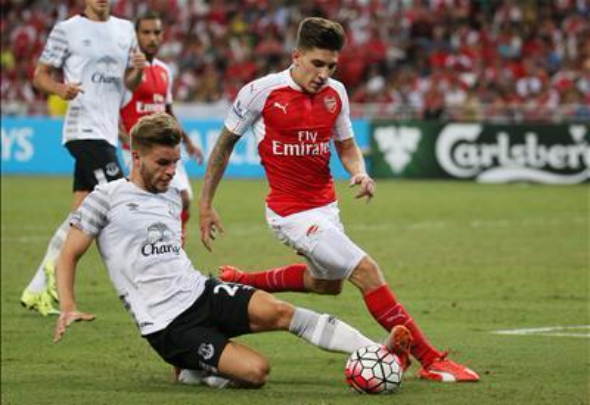 Luke Garbutt has joined Championship side Wigan on loan until January – and the Toffees fans are hopeful he will have a brilliant spell away and return an improved player.

Everton revealed on their official Twitter account on Tuesday that the 23-year-old left-back will spend the next five months at the DW Stadium.

The young defender moved to Everton from Leeds at the age of 16 for an initial £600,000 after eight years at the Yorkshire giants.

The young full-back has starred in 12 encounters for the Toffees, but he has found himself fall behind Leighton Baines, Bryan Oviedo and Brendan Galloway in the club’s pecking order.

A number of Everton supporters have wished him well, while some believe that he will come back and displace those ahead of him in Ronald Koeman’s squad.

Garbutt as good a left back as @LaticsOfficial have had since Leighton Baines. #EFC

Injuries disrupted Garbutt's time at Fulham. Chance for him to get back on track after showing signs of promise for #EFC in EL.

Good move for @luke_garbutt there's just no space in the squad for him at the moment so a loan was best for everyone. God luck laaa! #EFC

Can't get my head round garbutt going on loan again, Baines has had it, love the man but his legs are gone

Good luck @luke_garbutt – great club and a great chance to get games under your belt and come back stronger 👍🏻👍🏻 https://t.co/e4FdfK9EU3

Garbutt spent last season on-loan in the Championship with Fulham, where he played in 27 fixtures for the Craven Cottage side.

The young left-back has won 53 caps for England across the various age groups and he was part of the Under-17 European Championships winning side in 2010, also making the team of the tournament.

The youngster still has four-years on his current contract, but it is unclear where his future lies, with time passing him by to the point where he’ll no longer be considered an up and coming youngster.

In other Everton transfer news, the Toffees are set to appoint Martyn Glover as the latest recruit of their new scouting set-up.