Everton fans have collectively expressed their delight after long-term absentee Yannick Bolasie shared a video of him at the Finch Farm training complex pulling off a number of football tricks in training.

The 28-year-old has been sidelined since last December after he sustained a nasty knee ligament injury during the Toffees’ 1-1 draw against Manchester United, which has meant he has missed 57 games since the end of 2016.

Alongside his short video the DR Congo international tweeted a message on his personal Twitter account on Tuesday afternoon, which read: “To be back on grass is a beautiful thing.”

To be back on grass is a beautiful thing ⚽️💪🏾🔵#TheComeback pic.twitter.com/pkoA123WM1

After nearly a year out of the Everton squad, fans are excited at the prospect of his return to the pitch with many supporters calling for him to rejoin the team due to the club’s recent set of unsuccessful results.

Seeing you with a ball at your feet is a beautiful thing Yannick…can't wait to see you back in royal blue!!! #efc ⚽💪🏾💙 #TheComeback

You kept doing the same trick though pal! The defenders will be onto you! 😂 Great to see you out there 👌🏼

Fantastic to see you back on the pitch lad. No one will know what hit 'em #TheComeback #COYB

The winger moved to Goodison Park from Crystal Palace last summer and unfortunately only managed to make 15 appearances across all competitions during that time before he was ruled out with his ACL injury.

Bolasie impressed with his pace on the wing and provided four assists while he also netted a single goal during his opening season with the Blues against Burnley.

The DR Congo footballer looked likely to be out for a year with his injury, but his recent video appears to have suggested a return sooner than expected.

In other Everton news, Michael Ball has revealed that this Toffees player reminds him of a five-time Premier Title title champion. 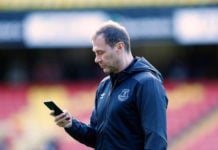