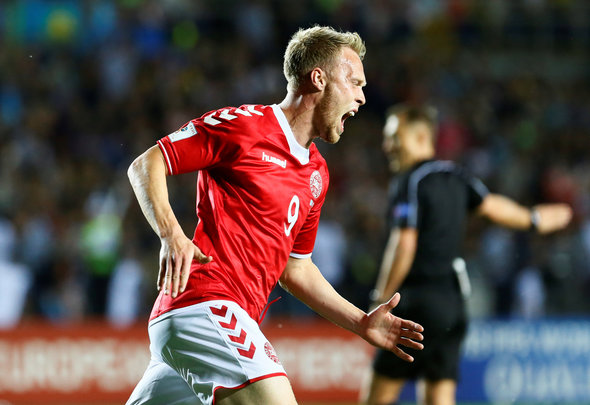 Everton are plotting an £18million bid for Feyenoord striker Nicolai Jorgensen – and the Toffees fans on Twitter are excited by the news.

Danish news outlet BT have reported that Ronald Koeman had been scouting the 26-year-old and is now interested in bringing him to Goodison Park as a replacement for the wantaway Romelu Lukaku.

Jorgensen proved to be a major part in helping Feyenood win the Eredivise title last season, by scoring 21 goals and crafting 14 assists in 32 league games.

If Koeman was to manage to land the 24-times Denmark international, it would make him his second purchase from the Dutch top flight this summer after Davy Klasseen recently secured a move to Merseyside.

Jorgsensen’s fine form and clear ability in front of goal has understandably sent Everton fans into a frenzy, with one supporter saying that he “fits the bill” for what the Toffees need.

I'd be up for this. I like the look of him and he fits the bill for what we need at the moment.

Good as Ramirez's strike ratio is questionable. Taking nothing away from him though he may well improve on it if signed by Everton.

Would rather get Dolberg

@Everton after Sandro.Keane,giroud,Jorgensen and iheanacho please

Jorgensen spent four years at FC Kobenhavn before moving to Feyenoord for around £3million last summer.

In his first season in the Netherlands he managed to win the golden boot award after helping Feyenoord to their first league title in the 21st Century.

He scored 25 goals across all competitions but failed to help his side get out of the group stages in the Europa League, despite supplying the assist in a 1-0 win over eventual winners Manchester United.

In other Everton news, the Toffees are strong favourites to land this Premier League goal machine.