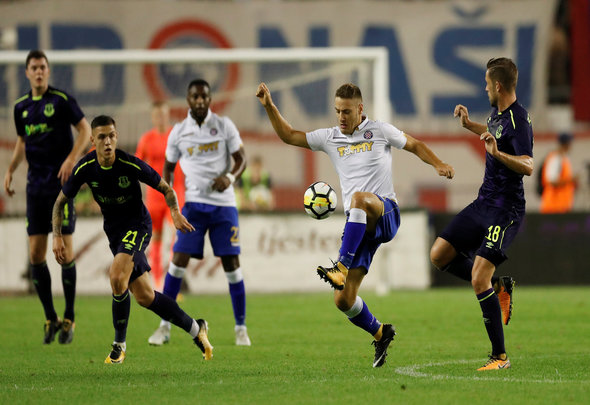 Everton fans have expressed their sympathy with new signing Nikola Vlasic after the attacker made his club debut during the closing minutes of their 3-0 defeat to Tottenham.

The 19-year-old joined the Toffees in a late summer deal from Hajduk Split on transfer deadline day and has a five-year-long contract at the Merseyside club.

The teenager came on during the 80th minute of the game as a substitute for Idrissa Gueye to make his highly anticipated debut for the Blues.

Everton fans felt disappointed that the young Croatia international had to make his first appearance during a heavy loss, and many supporters praised the midfielder on social media for his efforts despite being 3-0 down.

poor kid..should of stayed in split

He's with the Everton family now. He's going to make us all proud #coyb #vlasic

I mean vlasic is brought on and plays down the middle, what is the point?!

Must be glad he signed…

Everton lucky to escape with 3-0. Lack of width and mobility exposed. Vlasic run in injury time was about the only time someone beat a man.

Despite the disappointing result and a less than ideal first appearance for the Toffees, Vlasic remained positive and is aiming to look forward to future games instead.

“We need to forget this game and look forward quickly now. We have many games coming up and the next one is only a few days away. We are all determined to be better in the future,” he told Everton’s official website.

The Croation featured against Everton earlier in the season during the Blues’ Europa League qualifying matches against Hajduk Split.

Vlasic was one of nine new signings made by boss Ronald Koeman over the transfer window, and his squad overhaul appeared to be proving positive earlier on in the campaign but has recently taken a turn with two defeats to Premier League giants Chelsea and Tottenham.

In other Everton news, Lookman has backed an Under-23s player to make it up to the Toffees first-team after recent stunning performance.