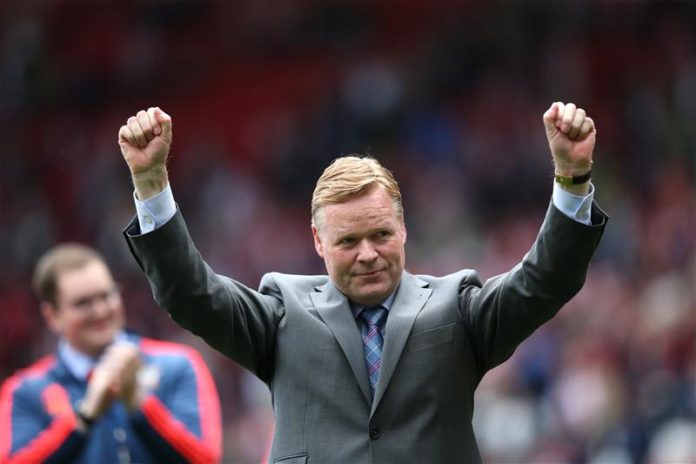 Everton have made a second “massive” move for Ronald Koeman, according to Dutch journalist Marcel van der Kraan.

Koeman has been installed as the odds-on favourite to be the next Everton manager following a wave of large bets on Thursday.

According to the Sky Sports website, Sky Bet have reported heavy backing for Koeman to take the vacant Goodison Park position over the last 24 hours, consequently cutting his odds from 11/1 on Wednesday night to just 4/11 by early on Thursday evening.

Football Insider reported on  Thursday afternoon that Koeman travelled with his agent Rob Jansen to Merseyside for talks.

It is suggested that majority Everton shareholder Farhad Moshiri is promising a significant transfer budget and is willing to double the wages of Koeman, who has just a year to run on his contract at St Mary’s.

This comes less than a week after St Mary’s technical director Les Reed spoke of his confidence that Koeman would commit to a new Southampton contract.

“Everton have come out all guns blazing to try and get the man they wanted in the first place,” Van der Kraan told Sky Sports News on Thursday night.

“When Ronald made it clear that Southampton was his priority and that his heart was there, he wasn’t going to go. But, as happens more in football, sometimes when you say no the more they want you, and they have now come back in for him, and it looks very, very positive.

“They know that, when you look at the situation at Southampton, Ronald Koeman has a great set-up. He’s been boasting about the training facilities and the team he’s built there and got into Europe twice in a row. You can’t really say it can get any better.

“So for Everton to convince him, and come in for him a second time, means they have to offer him a massive package, with great prospects on the transfer market, otherwise there would be no point trying to speak to him at this moment.

“They have other people on the horizon. I understand that, up until the weekend, Sevilla manager Unai Emery was a top candidate, and Frank de Boer has never been away from the table.

“But Koeman is the man Mr [Farhad] Moshiri [Everton’s owner], really wants and he’s made that clear. The next 24 hours could be very decisive. If I was putting my money on anything, it would be on Koeman heading north.”

Koeman has been tipped to succeed Roberto Martinez, who was sacked by Everton at the end of the season, after another strong campaign in the Premier League with Southampton.

But Van der Kraan believes Koeman may feel he has taken the Saints as far as they can go with a limited budget, while Everton are anticipated to spend heavily with the investment of new owner Moshiri.

“Significant transfer funds could absolutely be a decisive factor,” the journalist added to Sky Sports News. “At Southampton, he’s built a good team, bought all the right players. He has a good eye for players and knows the European market very well.

“So that could make a major difference for him to go. He needs to improve a lot of things at Everton to even match, let alone improve, what he’s got at Southampton.

“Ronald made it clear in his last column in De Telegraaf that, when he looks back at the last two seasons, he has really got the maximum out of the players that he’s bought.”

The chances of the 53-year-old moving north had appeared highly unlikely after Reed revealed discussions about a new Southampton contract are advanced.