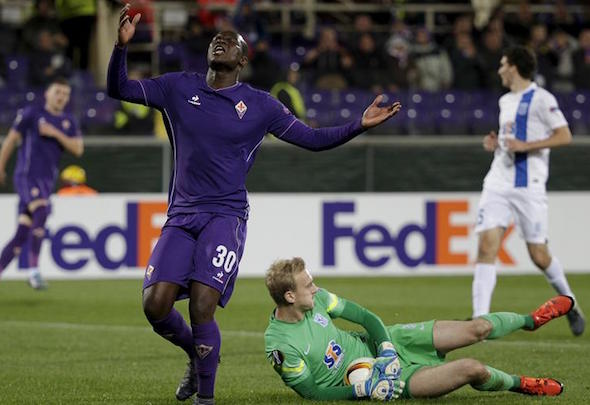 Everton are keeping close tabs on Fiorentina striker Khouma Babacar, according to a report.

Italian website TUTTOmercatoWEB claim the Merseysiders are ready to join the race for the Senegalese front man, 23.

Crystal Palace and West Ham are also interested in Babacar, who has been widely tipped for a move to the Premier League on the back of his performances in Serie A.

It is said that Fiorentina manager Paulo Sousa has indicated to the striker that he can leave the club he first joined as a 15-year-old.

Meetings have taken place among the Italian club’s hierarchy in recent days to discuss the interest in Babacar from rival clubs and the possibility of him leaving.

The 23-year-old scored seven goals in 24 matches in all competitions in 2015-16 after striking nine times in the previous season.

Babacar has been only a fringe player under Sousa, which has opened the door to a potential transfer to the Premier League.

The striker has three years remaining on his contract and reports have claimed he is rated at around £10million.

Everton are in the market for at least one new striker this summer as they target a replacement for Romelu Lukaku, who has admitted he could leave Goodison Park.

TMW report that nothing is likely to happen with Lukaku until after Euro 2016.

In other Everton news, an agent has confirmed that the club have made an approach for a prolific Premier League striker.