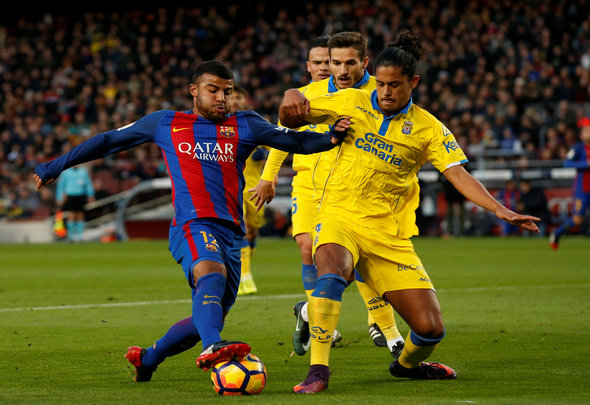 Everton are behind in the race to sign Las Palmas defender Mauricio Lemos in the summer transfer window, according to a report.

Marca claims that Italian giants Inter Milan are currently leading the race for the 21-year old as they have approached the player’s representatives but the La Liga side have still not received an official offer for the centre-back.

The Spanish newspaper reports that Serie A side Roma are also interested in snapping up Lemos this summer.

This follows up from the story in the Daily Mail which reported that Everton boss Ronald Koeman is keen to bring the defender to Goodison Park.

The report claims that although Lemos has a release clause in his contract worth around £27million, Las Palmas are willing to listen to offers starting from £18million.

The defender only signed for the La Liga side last summer but he made a significant impact in his debut campaign, notching up an impressive five goals for the club in all competitions.

The Uruguayan’s performances helped Las Palmas remain in the top flight of Spanish football for a second season in a row.

Lemos currently has four years remaining on his contract with the Spanish outfit.

Everton are likely to find it difficult to lure Lemos to Goodison Park next season with Inter in the hunt. In this current transfer market, paying around £18million for a defender who can help contribute with goals is very reasonable but the Toffees might not be able to guarantee him regular first-team football having already signed Michael Keane. The Merseyside club arguably have a slight advantage over the Italian side as they will play Europa League football next season but Inter are a much bigger club than Everton and Lemos could be tempted to play at the San Siro next season.

In other Everton transfer news, a Premier League rival is lining up a bid for this £25million-rated outcast.