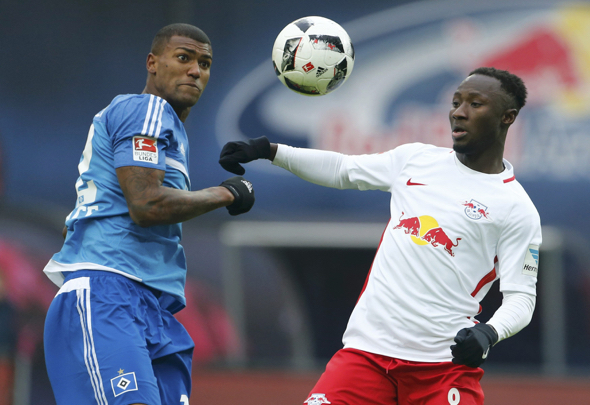 Everton are set to battle it out with Premier League rivals Leicester for the signature of Hamburg midfielder and Brazilian gold-medal winning Walace, according to a report.

The Mirror claim that the Toffees are looking to add yet another midfielder to their ranks, and Ronald Koeman has identified Walace as an ideal target.

The 21-year-old has only been on the European stage for a month, having joined German Bundesliga strugglers Hamburg from Gremio in an £8million deal during the January transfer window.

The defensive-midfield powerhouse has already impressed a number of admirers, including the Everton boss, and Leicester were said to be one of the teams pipped to his signature in January.

He played the full 90 minutes in his debut Bundesliga match against RB Leipzig, marking the appearance with a goal.

The Brazil international had previously made his official debut for the club in the DFB Pokal meeting with FC Koln four days earlier.

As well as Everton and reigning Premier League champions Leicester, The Mirror report that Italian Serie A outfit Lazio are keen too.

Following the arrival of Morgan Schneiderlin, and the emergence of Tom Davies, a central midfielder may not be the most pressing item on the agenda for Ronald Koeman and Everton in the summer. However, he could still be a very useful addition, if you take into account the uncertainty over the long-term future of James McCarthy, and the advancing years of Gareth Barry. It is still very early to predict what kind of an impact Walace will have in Europe, but he has already shown he can hit the ground running in Germany, and could be a decent, long-term addition to Everton’s midfield. Hamburg won’t want to sell so soon after landing the bright Brazilian talent, but with the club currently 15th in the Bundesliga, may be forced to consider offers in the summer.