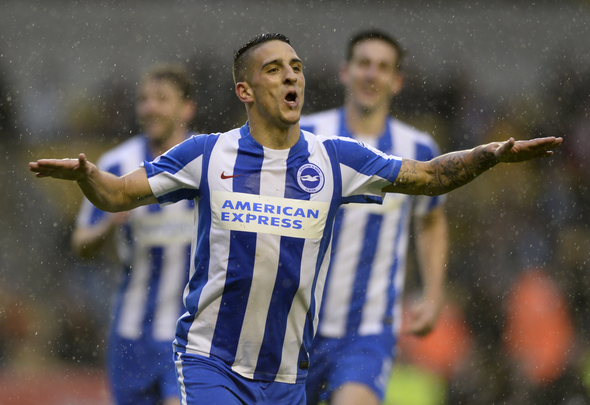 Everton are preparing to table a bid of over £20million for Brighton winger Anthony Knockaert, according to a report.

It is said that Brighton want to keep Knockaert but Everton are willing to lodge an offer “in excess of £20million” for the Championship player of the year.

Former France Under-21 international Knockaert has had a superb season as Brighton secured automatic promotion from the Championship, scoring 15 goals and supplying nine assists from 45 league matches to beat Chris Wood and Dwight Gayle to the award for the division’s outstanding performer.

ESPN FC report that Everton manager Ronald Koeman is in the market for a winger as trio Gerard Deulofeu, Aaron Lennon and Aiden McGeady are all expected to quit the club this summer.

With Yannick Bolaise continuing his recovery from a serious knee injury and likely to be sidelined until next year, a strong push is expected for Knockaert even though he signed a new contract only two months ago.

The deal ties the 25-year-old, who joined Brighton from Standard Liege in January of last year, to the south coast club until 2021.

In other Everton transfer news, the club have agreed to sign up a centre-forward who is loved by Ronald Koeman.