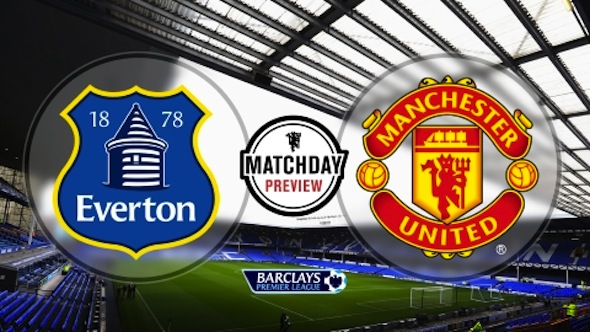 When an in-form Everton host an inconsistent Man United, there can only be one outcome according to Neil Harvey – and that’s goals…
Get the best odds and a £30 free bet now by clicking here
Everton v Manchester United
Saturday, 15:00
Everton
The Toffees are on a roll. A run of five matches unbeaten might not sound world beating. But consider that included fixtures at home to Chelsea and Liverpool, and away to Spurs, Swansea and West Brom, and the realisation is that runs of games don’t come much harder than that.
Roberto Martinez’s side ground out a couple of 0-0 draws on the road in that recent good run. But in the two home games played, both teams scored, suggesting the reins are loosened when performing at Goodison. All but two of Everton’s 12 goals have come from the strikers, with Ross Barkley the only midfielder managing to contribute, indicating that Everton’s midfield are not prone to pushing forward too much. That leaves Romelu Lukaku with a big burden to shoulder, which he’s done admirably so far, with five goals to his name.
Defensively though, there’s much room for improvement, with Everton having conceded in every one of their home games, leaking six goals in four matches. And that bodes well for a United forward line that’s been finding the net with increasing regularity as the season’s gone on.
Manchester United
United had been on a fine run of form of their own of late, scoring three goals in each of their victories over Liverpool, Southampton and Sunderland. That all came to an abrupt halt though in a 3-0 defeat at Arsenal. United have been all or nothing away from home this season, alternating wins and losses on the road.
But like Everton, the results must be of concern to the defensive coaches given the seven goals conceded in just four away games. Having kept a clean sheet at Aston Villa, United went on to ship two against both Swansea and Southampton, followed by the three to the Gunners, indicating that Louis van Gaal’s team have been vulnerable against top half sides on their travels. That makes 7th placed Everton look good things to find the net on Saturday.
Anthony Martial has been an instant hit, scoring three times in four starts since arriving from Monaco. Juan Mata has also weighed in with a perhaps surprising three goals from the wing. It’s been a quiet start for Wayne Rooney by comparison, who has just one goal from seven games.
United have been entertainers, win or lose, with their last five matches all containing three goals or more.
Match Odds
The price of 3.30 on a home win looks big considering Everton’s strong home performances over the last two months. By comparison, an inconsistent United look stingy at 2.40 given their losses at Swansea and Arsenal.
The value certainly looks to be with Everton, and for those feeling more conservative, the option of simply backing them not to lose makes great appeal, on the Double Chance market, at 1.69.
Under/Over 2.5 Goals
As explained, both sides have been letting in far more goals than they would have liked, and for that reason the odds against of 2.08 on there being Over 2.5 Goals look fantastic value.
Even for those of you who fancy the draw, it’s much more likely to be one with goals than without, and the 1.84 available on both teams to score, again looks irresistible.
Correct Score
I don’t see Everton losing this, and also expect goals, so a combination of a 2-1 Everton win and the 2-2 draw offers some entertaining prices while at the same providing some cover.
Recommended Bets:
3pts Back Everton or Draw (Double Chance) @ 1.69
3pts Back Over 2.5 Goals @ 2.08
3pts Back Both Teams To score @ 1.84
1pt Back Everton to win 2-1 @ 13.50
1pt Back 2-2 Draw @ 17.00
Get the best odds and a £30 free bet now by clicking here