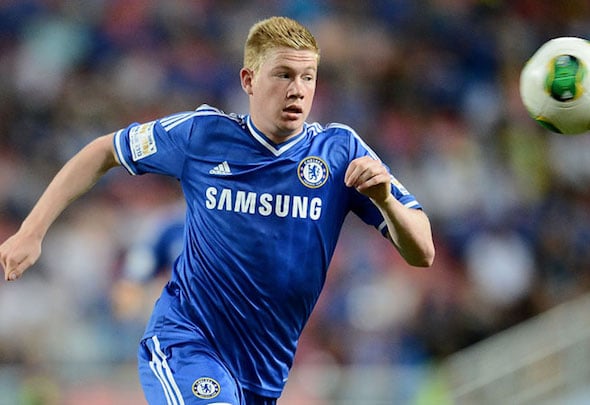 By Tony Hughes
Kevin de Bruyne “dazzled” the Chelsea players during his ill-fated spell at Stamford Bridge, according to Ryan Bertrand.
The England international pinpointed De Bruyne as the player to fear ahead of Southampton’s trip to Manchester City on Saturday afternoon.
Bertrand and De Bruyne were team-mates at Chelsea when City’s £50million summer signing could barely get a look in before he was off-loaded to Wolfsburg for £18million in January 2014.
The Belgium international has subsequently emerged as one of the leading playmakers in Europe, which is no surprise to Bertrand.
“If you have trained with him — like I have — you would know he always had that end product everyone is talking about today,” Bertrand told The Sun. “He dazzled us in training the moment he arrived.
“Kevin has that ability to provide assists and score goals and he’s now showing that on the biggest stage.
“It’s so easy for everyone to say how much he has improved since leaving Chelsea but the truth is he always had it. He just, for whatever reason, was not given the opportunity to show it at Chelsea.”


De Bruyne, 24, quit Chelsea due to a lack of first-team action and has subsequently claimed that he was ignored by Jose Mourinho when the Portugese began his second spell at Stamford Bridge in the summer of 2013.
The Belgian has been an instant hit at City since his late August switch, scoring six goals and supplying seven assists.
Bertrand added: “The move to City has been fantastic for Kevin, considering he made that decision at the start of last year to leave Chelsea to play first-team football.
“He has got his reward now. Not only did he achieve such a big transfer to City from Wolfsburg, he has also been playing a massive role for them this season.
“I congratulated him personally by phone when I first heard the City deal was confirmed.”