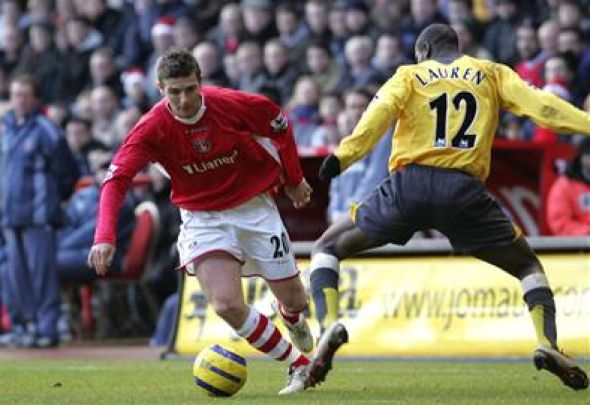 Lauren Etame-Mayer has given three reasons why Arsenal can overcome Bayern Munich in the Champions League knockout stages.

The Gunners were drawn against German giants Bayern Munich in Monday’s draw, which is the fifth time the two sides will have met in the competition in the last six seasons.

Bayern Munich have often had the upper-hand, eliminating Arsenal at the last-16 stage in both the 2012 and 2013 tournaments.

However, Lauren believes that his former side have improved greatly since the two sides last met – which was a 5-1 victory for Bayern in November 2015.

He took to Twitter to praise Arsenal’s “depth”, “maturity” and “solidity”, adding that they had a real chance of progressing through to the next round of the competition.

Bayern again, but there’s now a greater depth, maturity and solidity to this @Arsenal side. We have a real chance of progressing. #UCLDraw https://t.co/xQl78fu0ii

Lauren made over 240 appearances for Arsenal in all competitions between 2000 and 2006, and was part of Arsene Wenger’s ‘Invincibles’ side that lifted the Premier League title in 2004 and finished unbeaten.

The former Cameroon international retired from the professional game in 2010 after a short spell with Cordoba.

The Gunners have been impressive so far this season, and are unbeaten in the league since their opening day defeat to Liverpool.

They have won their last three league games on the bounce, scoring at least three goals in their last five league wins.

Alexis Sanchez has been the Gunners’ star performer this term, registering 13 goals and 11 assists; the best return of any Arsenal striker at this time of the season in quite some time.

Meanwhile, Arsenal’s defence has improved greatly with the addition of Shkodran Mustafi this summer. They have conceded just 15 league goals this season.

In other Arsenal news, here is how Gunners fans reacted to the draw.