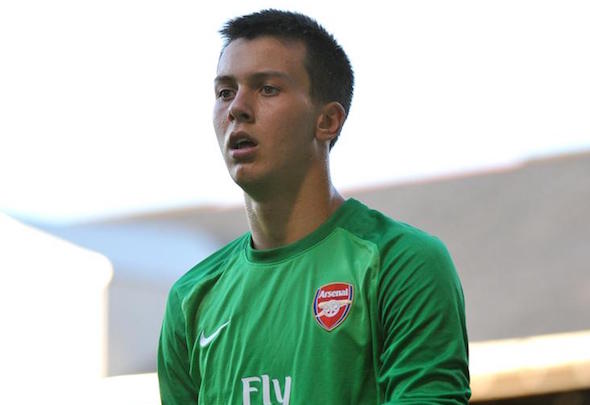 EXCLUSIVE By Pete O’Rourke
Arsenal goalkeeper Deyan Iliev is in advanced talks to join Premier League rivals Swansea City, Football Insider sources understand.
Iliev, who is fourth-choice keeper at Arsenal, is out of contract with the Gunners this summer and the club are ready to let him move on permanently this month as he is well down the pecking order at the Emirates.
A well-placed source has told Football Insider that Swansea are in discussions with Arsenal to try and agree a compromise for Iliev to allow him to leave on a free transfer.
Premier League strugglers are keen to bring in the Macedonia Under-21 international to add competition to their goalkeeping ranks.
Swansea goalkeeping coach Tony Roberts knows all about Iliev having worked with him while he was at coaching Arsenal and he has recommended Iliev to Swansea.
Iliev, who was named in Arsenal’s 25-man Premier League squad this season, never made a first-team appearance for the club after joining in 2012.
The 22-year-old saw his progress at Arsenal hampered by a serious injury which kept out of action for almost two years and he only returned to training last summer.
Ilievis keen to get his career back on track and feels Swansea will offer him a quicker pathway to first-team football than Arsenal.
In other Arsenal transfer news, Football Insider can reveal that a Gunners midfielder has agreed a last-ditch move to south-east club and his debut is set for this weekend.
We’ve launched a << BREAKING NEWS FEED>> exclusively for your club. ‘Like Us’ on Facebook by clicking here if you want 24/7 updates on all Arsenal breaking news.