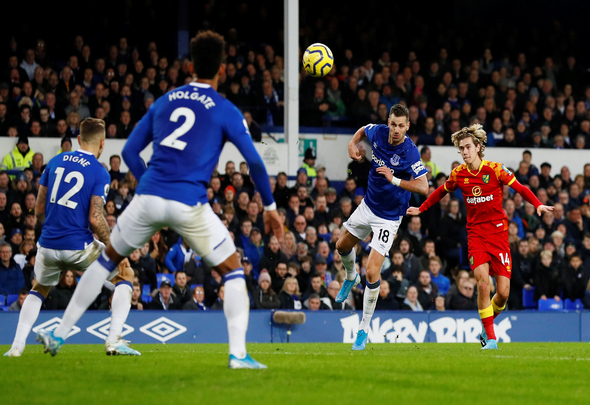 Speaking exclusively to Football Insider correspondent Laura O’Leary, the former Tottenham and Aston Villa attacker claimed that Schneiderlin wouldn’t make his team if he was in charge of the Toffees as the 30-year-old kills the whole vibe.

Schneiderlin was making his 10th appearance of the season for Marco Silva’s side in the defeat to Norwich and was subbed off at the 56th-minute mark.

Bent explained that all Schneiderlin did in his opinion was pass the ball sideways and backwards before acknowledging that he understood why Toffees supporters would be frustrated with him.

When asked about Schneiderlin coming under-fire from fans for his display against Norwich, Bent told Football Insider: “Yeah for me Schneiderlin wouldn’t be in my team.

“For me, the thing with Schneiderlin is it always seems to be sideways and backwards, and it’s a bit of a killer.

“I’m not surprised Everton fans were getting on his case as you need someone who is going to get on the ball and pass it forward, and for me when he gets on the ball it is way too much backwards and sideways and Everton with the players they’ve got, need the ball up their quickly so they can go and do their stuff.

“When you get someone on the ball who is slow, it kills the whole vibe, so for me, it wouldn’t work and I can understand why the fans would be so frustrated with him.”

Schneiderlin arrived at Goodison Park in January 2017 after joining the Toffees from Manchester United and he has made a grand total of 80 appearances for the Merseyside club.

The French midfield-enforcer signed a four-and-a-half-year deal upon joining the club which means he is still set to be under contract with the club until 2021.

In other Everton news, Football Insider can reveal who Bill Kenwright is backing if Marco Silva is sacked from his job as manager.