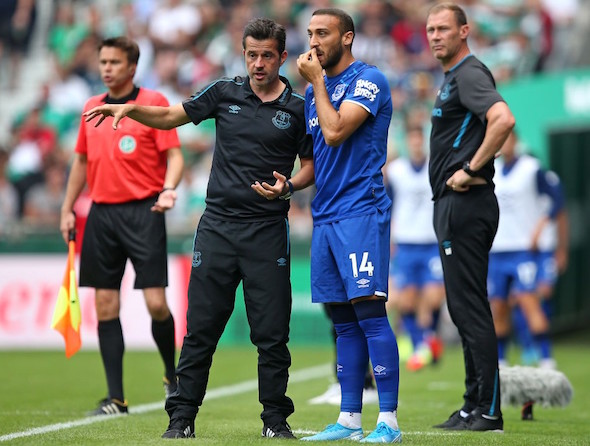 Danny Mills suggests that Everton striker Cenk Tosun has been making waves in training under Marco Silva after being handed a rare start in the win over Southampton.

The former Leeds and England defender, speaking exclusively to Football Insider assistant editor Russell Edge, says that the Turkish attacker will have shown an exceptional amount of hard work to force his way into his manager’s plans after seemingly facing the exit this summer.

As revealed by Football Insider, the club have been weighing up selling the hitman for a £17million loss in January with Silva having been open to letting him go in pre-season.

Despite the boss having the likes of Dominic Calvert-Lewin, Richarlison and Moise Kean at his disposal, it was Tosun who was given the nod to lead the line against the Saints and Mills says that will be down to his impressive training performances.

Silva told Football Insider: “He was out the door, wasn’t he? He was about to leave but it goes to show it can happen, players come back in, they’re part of your squad and you have to use them.

“He’s clearly worked very, very hard in training, he’s deserved his start, he got his goal (v Spurs), he’s put the effort in, that is decent management.

“All credit to the player who hasn’t sulked, who hasn’t gone and sat on his laurels and thought: ‘You know what? They didn’t want me, I’ll just take my money and sit in the reserves. No, I’ll do the best I possibly can and see where that takes me.'”

Tosun has only featured three times in the Premier League this season, Saturday’s clash his only start, while he also has two substitute appearances under his belt in the League Cup.

The 42-cap hitman has scored just 10 times in 48 games for the Toffees, all but one of those strikes coming in the top flight.