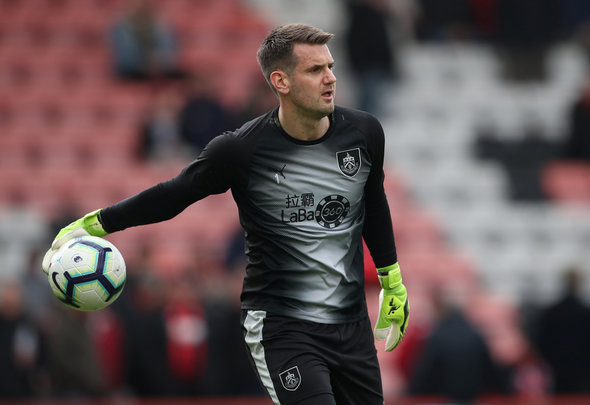 The former Villa Park star, speaking exclusively to Football Insider, says that the Clarets’ shot-stopper is a “brilliant” player between the sticks and that his experience could prove invaluable to the Villains next season.

Heaton is among a number of goalkeepers Villa have been linked with during the transfer window, the Sun reporting that they have tabled an initial £7million offer to Burnley for the three-cap England international.

While Bent acknowledges 33-year-old Heaton is heading into the latter stages of his career he insists he would be a quality capture for his old side, who already have three senior goalkeepers on their books.

“I do like Tom Heaton but obviously you look at his age and he’s a bit older than the rest,” Bent told Football Insider.

“He’s a brilliant goalkeeper from what I’ve seen of him, got England caps. Obviously, you can never have enough good goalkeepers because we’ve seen how crucial it is in any league, where you’ve got a very good goalkeeper and below-par, average goalkeeper and something happens to the first one, it could cost you.

“I do believe Villa can go out and get one more. I probably would go Tom Heaton, I know he’s a bit older, but with his international experience and experience in general, I’d probably go for him.”

Jed Steer ended the campaign as Dean Smith’s first choice between the posts last season, with Orjan Nyland and Lovre Kalinic both playing their part in the Villans’ run to play-off glory.

Heaton had a similar campaign at Burnley, missing the first half of the campaign through injury before cementing his place as both first choice and club captain from January onwards.

In other Aston Villa news, Danny Mills has tipped one of the club’s star performers to demand a £40million fee in the next year.