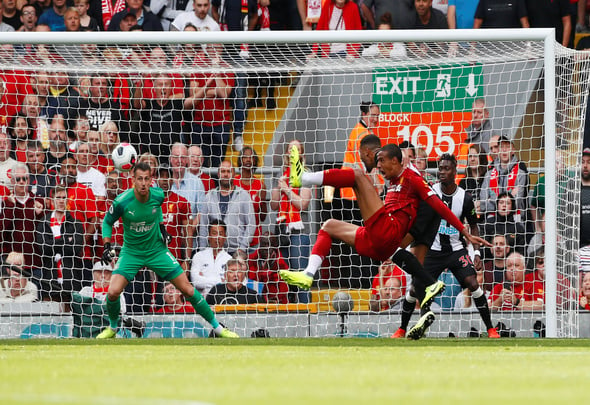 Darren Bent has blasted the defending of Newcastle United captain Jamaal Lascelles after the club’s defeat to Liverpool at Anfield.

Speaking exclusively to Football Insider assistant editor Russell Edge, the former Aston Villa and England striker says that the 25-year-old should have been penalised for a foul against Reds counterpart Joel Matip and that he was lucky to escape without conceding a penalty.

Lascelles appeared to drag the Liverpool defender to the floor when defending from a set-piece, the referee, assistants and VAR all deciding not to award a foul despite the protests of the home side and fans.

Bent insists it was a lucky escape for the English centre back and that it was a poor example to set as one of the club’s senior defenders and captain.

Bent told Football Insider: “Lascelles this season hasn’t been great. He’s grabbing Matip at the corner which should have been a penalty. I don’t know why VAR didn’t check it or what but it was a clear and blatant penalty.

“You can’t be bothered to run with him so you just grab him. He was fortunate enough that he wasn’t punished by it.”

Lascelles has been a mainstay in the Newcastle defence this season, starting every one of their five Premier League games under Steve Bruce.

Appointed as captain by former manager Rafael Benitez, the former Nottingham Forest man is closing in on his 150th appearance for the club, with 142 games across all competitions under his belt.

In other Newcastle United news, Danny Mills has told Football Insider what he thinks about summer signing Joelinton.