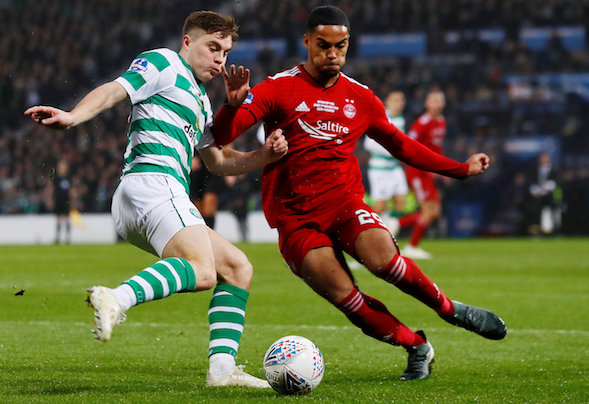 Jackie McNamara says that he expects James Forrest to return to the Celtic starting XI against AIK with Leigh Griffiths the player facing the axe.

Speaking exclusively to Football Insider, the former Hoops and Scotland star says that he sees Neil Lennon utilising a more conservative style of play than what he has implemented in recent weeks.

Celtic dropped out of the Champions League qualifiers using a three-man defence, a system which Lennon reverted to again in the Scottish League Cup win over Dunfermline Athletic.

McNamara suggests the Bhoys’ boss will likely turn to a more traditional four-man defence to keep things tight against the Swedish side at Celtic Park, tipping Forrest to return to the starting XI in place of fan favourite Griffiths.

Asked if Forrest would return to the starting XI, McNamara told Football Insider: “Yeah, he’s started games, been a massive player and done it when it matters. When possession drops to 50/50, these guys – Forrest, Brown, McGregor – they don’t drop their levels.

“It depends (who drops out), if he goes for three at the back, he’s played the two up front at the weekend. I don’t think he’ll start with that tomorrow, he’ll be a little bit more conservative, probably start with Christie behind Edouard.”

Forrest came off the bench and scored the all-important winner against Dunfermline on Saturday, the Hoops taken to extra time by their Championship rivals.

It was an experienced line up for Lennon, although he did manage to rest the likes of Scott Brown and Jozo Simunovic after featuring in the club’s defeat to Cluj.