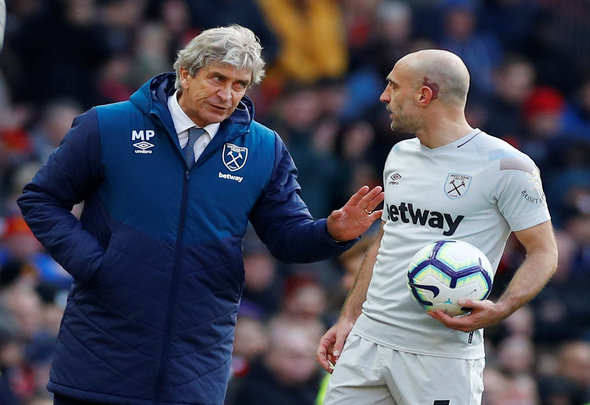 Paul Robinson says there appears to be a split in the West Ham dressing room between Manuel Pellegrini and his players after their poor run of form.

The former Spurs and Englan goalkeeper, speaking exclusively to Football Insider assistant editor Russell Edge, says that the Hammers players do not appear to be putting the effort for one another this season, having seen them go eight games without a win across all competitions.

The Irons were defeated 3-2 by Tottenham on Saturday afternoon, making it three defeats in a row and five losses in their last seven Premier League outings.

With the Hammers sitting 17th in the top-flight table, Robinson claims there is a clear divide in the dressing room not only between players and manager but among the squad themselves.

Robinson told Football Insider: “It’s hard, players suffer dips in form and it’s very, very hard when you’re not in form and you’re playing in a team that’s not playing well either – it’s not just a team that aren’t playing well, the team are awful at the moment.

“There’s nobody working for each other. There looks to be a divide between manager and players and a divide between certain players as well. It just doesn’t look like a harmonious dressing room at the moment.”

West Ham’s next three games sees them take on Chelsea, Wolves and Arsenal, the Gunners five points ahead of the Hammers in eighth.

One of the club’s biggest issues lies at the back, with backup goalkeeper Roberto yet to keep a clean sheet since stepping in for the injured Lukasz Fabianski.

In other West Ham news, Danny Mills has ripped into one West Ham man who is “all over the shop” despite “looking good” once.