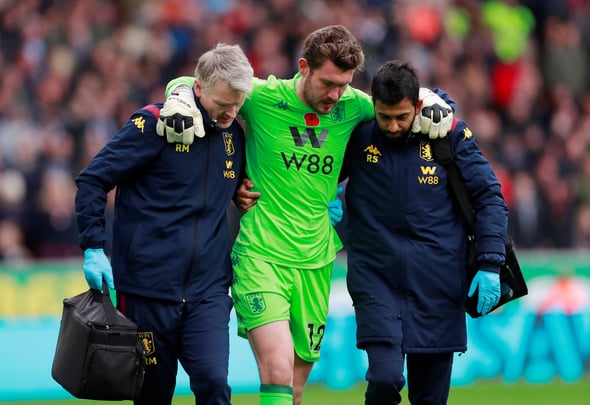 Paul Robinson admits that he is gutted for Aston Villa goalkeeper Jed Steer after seeing him forced off through injury against Wolverhampton Wanderers last weekend.

The former England international, speaking exclusively to Football Insider assistant editor Russell Edge, says that the 27-year-old will feel a little hard done by after being replaced by Tom Heaton over the summer and that Sunday’s blow is another kick in the teeth.

While the club are yet to confirm how long the shot-stopper is out of action for, Sky Sports report that he is facing a two-month spell on the sidelines with a calf injury.

Robinson says there is nothing you can do but feel sorry for Steer after watching his second Premier League appearance end in unfortunate circumstances.

Robinson told Football Insider: “I felt for him so much. I was watching the game and he’ll feel hard done by that Tom Heaton was brought in this season. I personally feel as though Tom Heaton was a very astute signing, good goalkeeper and one that could potentially keep you in the Premier League.

“In Jed Steer’s situation you could feel for him, he’s been replaced, he’s been put on the bench, he finally gets his chance to show what he can do again and it’s just very unlucky. You’ve got to feel for him.

“For want of a better phrase, it was just one of those things.”

Steer played a crucial role in Aston Villa’s promotion from the Championship last season, playing 19 times in the latter half of the season after being recalled from his loan spell at League One Charlton Athletic.

He has a total of 31 appearances under his belt for the Villans, with one of those coming in the final game of the 2014/15 Premier League season in which the club were relegated.

In other Aston Villa news, Football Insider can reveal that Dean Smith has given the green light for one of his signings to be sold by the club.