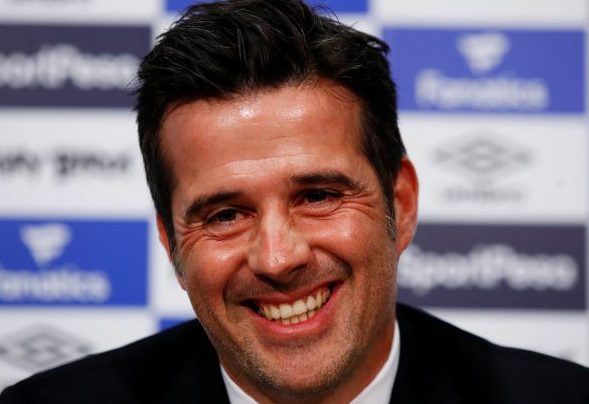 Noel Whelan has urged Everton manager Marco Silva to hand winger Alex Iwobi his first league start for the Toffees in a bid to bring some much-needed energy to the side.

The former Leeds United striker, speaking exclusively to Football Insider, says that the Merseyside outfit need to show a positive reaction after last week’s defeat to Aston Villa and that Iwobi can be the difference against Wolverhampton Wanderers this weekend.

Silva’s men managed to overcome a potential banana skin of a League Cup tie against Lincoln in midweek, Iwobi netting in the 4-2 victory.

With the former Arsenal man yet to start a Premier League game for Everton, Whelan insists that he could be the necessary game-changer at Goodison Park on Saturday.

Asked if he thought it was time for Iwobi to start, Whelan told Football Insider: “I think so, I think so. You’ve paid a lot of money for this player, he did fairly well at Arsenal. Hit the post against Aston Villa, very unlucky, but he looks sharp, he looks fit, he looks strong.

“Maybe they need a bit of a freshen up there at Everton because after a disappointing result when they could have gone top against Aston Villa, you’re looking for a reaction. Maybe, just maybe, it takes a little bit of a change of personnel to get that.”

Iwobi, 23, featured for just under half an hour against Aston Villa on Friday, his introduction from the bench unable to stop the Toffees from suffering a 2-0 defeat to the Villains.

He went on to play a total of 82 minutes against Lincoln, joining fellow summer signing Moise Kean in making his first start for the club.

In other Everton news, Danny Mills has told Football Insider he expects one Toffee to bounce back after his “shocker” against Villa.