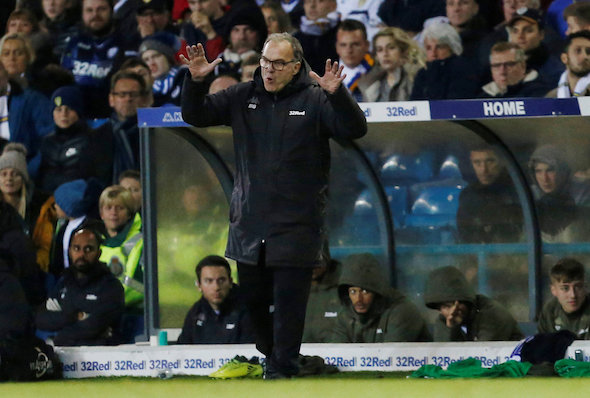 Leeds United manager Marcelo Bielsa will be forced to hand teenage defender Pascal Struijk a first-team promotion out of necessity due to a lack of other options, according to Noel Whelan.

Speaking exclusively to Football Insider, the former Leeds striker and lifelong fan of the Whites says that the Argentine boss is severely lacking in natural options at the heart of the defence.

This summer has seen Ben White join the squad on loan from Brighton, the youngster replacing Pontus Jansson after his move across the Championship to Brentford.

Whelan says that 6ft 3in giant Struijk, who was on the substitutes’ bench for the two play-off semi-final legs against Derby, could be promoted into a more senior position due to the limited number of alternatives at Bielsa’s disposal.

He told Football Insider: “I don’t expect he’ll be on the bench but I expect to see him at some point throughout the season because of the thinness of our squad.

“Marcelo Bielsa likes to keep his squad trim and he usually only brings in a new face when there’s injuries. Every one of the under-23s, because of the season they had, have a chance.

“You’ve got Luke Ayling who can drop in, you’ve Berardi who can fill the hole, you’ve got Ben White – yeah, we are light in that position again. We don’t need more wingers, we don’t need more right-backs. When it comes to centre-halves? We need somebody.”

Struijk, 19, arrived at Elland Road from the youth system of Dutch giants Ajax back in January 2018 but is yet to make an appearance for the first-team, three unused substitute outings last season the closest he has come to his debut.

In other Leeds United news, Whelan has blasted the board for the loss of a “massive tradition” at Elland Road.