Noel Whelan has claimed Leeds United fans slamming Gaetano Berardi as a “liability” have got it wrong.

Speaking exclusively to Football Insider, the ex-United striker insisted he is comfortable with Berardi as the third centre-back and believes he should continue in the team during Liam Cooper’s absence.

The Switzerland international, 31, has been the subject of stinging criticism from many supporters following his 14th minute red card in last weekend’s 2-1 defeat to Millwall.

Leeds subsequently won their appeal for the dismissal to be overturned.

Had it stood, it would have been Berardi’s seventh sending off for the Whites defender, a club record.

“I know many fans are saying Berardi is a liability but he was the victim against Millwall of a big decision that the referee got massively wrong,” Whelan told Football Insider.

“Seven red cards is a lot for any player, and there have been plenty of times when his petulance and anger has got the better of him. That’s one thing we can’t put up with.

“But I wouldn’t want to take that aggression out of him. I like the passion and commitment that he brings. On this occasion, Berard didn’t do a lot wrong.

“He is the third centre-back and Marcelo Bielsa thinks he has fitted in well and provided cover when needed. I would agree with that.

“I don’t think we have a better option to cover for Liam Cooper. People who say he shouldn’t play for Leeds again. That’s not right.”

Berardi will now be available for the home Championship game against Birmingham City on Saturday, 19 October.

In other Leeds United news, a £120K-a-week Premier League star is willing to take pay cut to move to Elland Road. 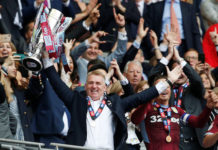