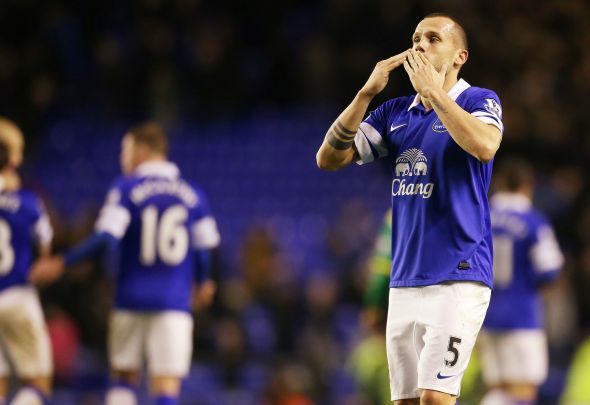 Johnny Heitinga has groaned that he is no longer able to afford private jets and a personal shopper – and football fans have reacted hilariously on Twitter.

The former Everton defender has opened himself up to ridicule with an interview in which he has explained how his lifestyle has changed since retirement from football.

Heitinga and his wife wife Charlotte-Sophie, the sister of Boudewijn Zenden, miss the ultra-expensive trappings of fame and fortune.

“When I was still playing football we had a lot more money coming in. Our expenditures were likewise. Now we are trying to adjust,” the 33-year-old told Dutch magazine Linda, as quoted by FourFourTwo.

“In the past, we sometimes chartered a private jet, but we don’t do that now. On holidays we do still rent a fancy villa, but you get different categories of ‘fancy’.”

Heitinga also revealed that a stylist would have previously decided on the couple’s fashion choices, but now they have the problem of having to look for clothes themselves.

There was little mercy from football fans on social media, with some urging Heitinga to take a reality check and others sarcastically suggesting a whip round to fund a more luxurious lifestyle for the Dutchman.

Johnny Heitinga struggling badly since retirement. Someone start up a GoFundMe account for him, maybe? pic.twitter.com/2bNsNDk7ep

Deepest condolences to Johnny Heitinga who can no longer afford a personal stylist or fancy villas #struggle https://t.co/mNcUlLbTI5

Imagine the horror when you wake up one day and can’t afford a private jet any more. Weep here with Johnny Heitinga https://t.co/SkNoeQAtJV pic.twitter.com/fUcDC06njW

That Heitinga interview is amazing… are we supposed to feel sorry for him?

You think your life is tough. Imagine the struggles of poor Heitinga who can’t afford private jets any more. https://t.co/RTSu74bb1w

Johnny Heitinga moaning about since retirement he can’t now afford private jets. Get that violin out.

Heitinga joined Everton from Atletico Madrid for £6million in the summer of 2009 and accumulated 140 appearances in five years at the Merseyside club.

He left Goodison Park for Fulham in 2014 and, following a short spell back at boyhood club Ajax, retired last February.

Heitinga also won 87 caps with Holland during a career that included a spell in the Bundesliga with Hertha Berlin.

In other Everton news, Redknapp shares why he has been blown away by the swagger of one Everton ace.