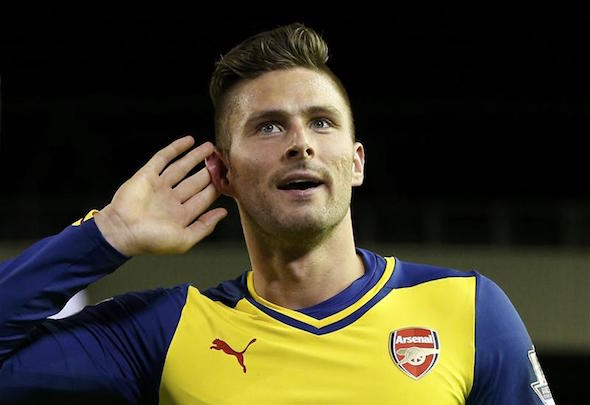 Olivier Giroud put in a sub-standard performance against Belarus on Tuesday evening for France, which included a terrible miss and fans were quick to take a dig at the forward on Twitter.

The striker was put through on goal by a neat bit of play from fellow attacker Antoine Griezmann, but the Arsenal forward couldn’t even hit the target with his effort.

Giroud played 83 minutes of France’s 0-0 draw against Belarus, but fans were clearly not happy with the attacker’s miss.

Giroud robbed Griezmann. What an assist that would've been. What a player. #FIFAWCS2016

Just switched over to see Griezmann lay on a peach of a ball to Giroud to miss. Anyway, does Hleb still play for Belarus?

Griezmann magically puts it on a plate for Giroud, and you already know what's happened, he's only gone and bottled it.

The 29-year-old has only seen 12 minutes of football for Arsenal in the new campaign after he came on around the 78th minute against champions Leicester.

Giroud finished the 2015-16 campaign with a hat-trick against relegated Aston Villa, and scored three goals at Euro 2016, but was still booed by some sections of the French crowd.

The former Montpellier man moved to Arsenal in the summer of 2012 in a £13million deal.

He still has two years left on his current contract, but Arsene Wenger has moved this summer to bring in forward Lucas Perez from La Liga side Deportivo La Coruna for £17million.

In other Arsenal team news, Alexis Sanchez has been given the captain’s armband for Chile in Tuesday’s World Cup qualifier against Bolivia.