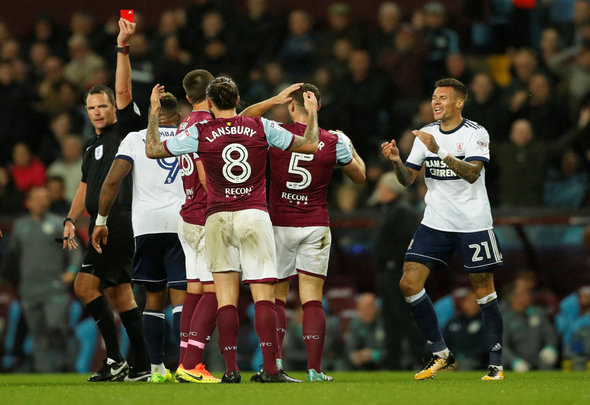 Aston Villa fans have expressed their mixed views on social media after the club confirmed that they would be appealing Henri Lansbury’s red card on the grounds of dismissal.

The 26-year-old was shown the second red card of the game by referee James Linington during the second half of Tuesday night’s game against Middlesbrough after he fouled Middlesbrough midfielder Marvin Johnson.

Opposition attacker Adama Traore had already been sent off just four minutes into the clash during his first appearance for the Yorkshire club in a year.

Many Villa fans seem less that sympathetic for Lansbury and want the midfielder to serve the potential three match ban, while other supporters joked and asked whether they can appeal against the “wrongful appointment” of manager Steve Bruce.

The way it's gone so far I might put in an appeal against myself for buying my season ticket.

Why it's effectively cheating. No attempt to play the ball

Both should be rescinded, neither were reds

Best off with him banned. Can the fa please pan the other 11 and ban Bruce for life.

It’s unsurprising that fans’ spirits are feeling a little dampened during the current campaign as the club are in eighteenth place in the Championship standings after a series of disappointing results.

Under Steve Bruce’s leadership the midland club have only managed to secure one victory out of seven Championship games so far this season after securing a 4-2 win over Norwich City in August.

The club will now look ahead to their next match in the competition as Villa head to the Oakwell on Saturday to face Barnsley.

In other Aston Villa news, Lee Hendrie has slammed the club’s recruitment.