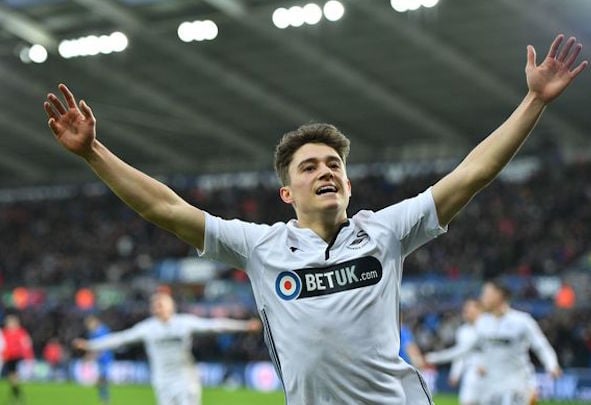 The fee for Daniel James may fetch £15million as Southampton and Bournemouth join Leeds United in the race for his signature, according to the Daily Mail.

The newspaper claim James, 21, is a player in demand following his latest impressive display on Sunday, when he scored the only goal of the game in Wales’ 1-0 Euro 2020 qualifier win against Slovakia.

The Mail report Swansea City pulled the plug on James joining Leeds on deadline day after a medical had taken place and terms were agreed, but the Yorkshire giants are still keeping tabs on him ahead of the summer.

Back in late January, a £10million fee for James, made up of an initial £1.5million loan payment plus a further £8.5million to make the deal permanent in the summer in the event of Leeds’ promotion, seemed fairly hefty and based more on promise than actual achievement. The winger’s subsequent impact for club and country strongly suggests Leeds recruitment chief Victor Orta had negotiated a brilliant deal. How United will be rueing its collapse, given some of the eyeopening performances of the Wales international. He looks an immense talent, who is learning to harness his breathtaking speed with improved decision-making and far greater consistency. The only way Leeds could be involved in a battle for James’ signature this summer if they are in the Premier League. There’s no doubt the rising star is heading to the top flight. United will need to be there to have any hope of outbidding the likes of Southampton and Bournemouth.