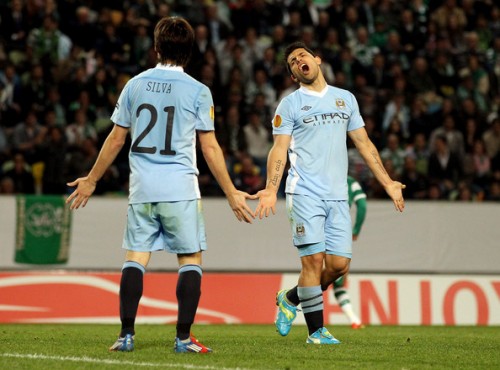 By Coral Barry
Manuel Pellegrini will have to remodify his Manchester City attack following an international break that has provided the manager with fresh selection headaches.
Sergio Aguero and David Silva, his two star players, will both miss big chunks of the autumn programme after sustaining injuries while in action for Argentina and Spain respectively.
With doubts surrounding the fitness of defender Aleksandar Kolarov and Vincent Kompany, Pellegrini will have to tweak the league leaders’ line-up for the Premier League clash against Bournemouth on Saturday.
Football Insider looks at five ways Pellegrini can cope in the absence of some of his most influential players over the coming months.
[nextpage title=”Next page”]
Give De Bruyne a free role
In 16 games without Spanish maestro Silva in their team, City have won ten, drawn two and lost four, including recent setbacks to West Ham and Tottenham Hotspur. Compare that to Agureo’s last 17 matches out injured and City stride was hardly broken: 14 wins and two draws. Kevin De Bruyne can fill the gaping No10 void left by Silva. Although deployed mostly out wide so far, he played predominately as a playmaker at Wolfsburg last season, scoring 16 times and providing a whopping 21 assists in the Bundesliga alone. In the attacking free role De Bruyne scored 94% of his goals and provided 78% of his assists. De Bruyne is the ideal solution to replace Silva in the middle, perhaps even permanently.
Bony to spearhead attack with supply from wings
How do you replace a striker that can score five goals in 20 minutes? Well, with a replacement who cost£28million just nine months ago. Bony is the obvious solution to Aguero’s latest hamstring problem. He scored 25 goals in his first season at Swansea and was the Premier League’s top scorer in 2014. The powerful target man is a strong aerial presence and could be the perfect battering ram against Bournemouth on Saturday. In their last defeat, Bournemouth struggled to repel Stoke’s threat into the air and conceded two headed goals from pinpoint crosses. With De Bryne and Raheem Sterling fizzing on either side of the Ivory Coast striker, the supply line should be there for Bony to bulldoze City to victory.


Sterling as the main striker with Toure in support
Sterling led the line for Liverpool 20 times last season and while he was not exactly prolific, scoring five times, he was effective at stretching opposition defences. Selected up front because of his pace and movement, Sterling was able to get into the space behind backlines and provide a focal point for Philippe Coutinho’s wide passing range. Sterling needs blue chip support to be at his most effective. And that can come from Yaya Toure. The Ivorian’s power and thrust can be the perfect foil to Sterling’s low centre of gravity and, away from home, these two could provide an sound platform for City’s counter-attacks. What about the Manchester derby? Pellegrini will be only too aware that Louis Van Gaal’s defence collapsed in the face of of Arsenal’s breaks and speedy combination play, conceding three in 20 minutes.
A right-back to fill left-back hole
If Kolarov is to miss the next game, City will have no established left-backs available. Gael Clichy has yet to feature this season due to injury and their most promising youngster in that position, Angelion Tasende, is currently on loan at sister club New York City FC. That leaves Pellegrini with either Bacary Sagna or Pablo Zabaleta, right-backs by trade but flexible and experienced enough to slot in on the other flank. With Zabaleta now fit and back in the team, Sagna could be asked to stand in got Kolarov.

Treat all matches with equal importance
City cannot afford any more Champions League defeats or to lose ground in the league. Silva and Agureo are certain to miss the Manchester derby on 25 October, the crucial away tie at Sevilla four days later and a Capital One Cup encounter with the in-form Crystal Palace. Silva could feature in the second Sevilla game on 2 November,  but he might return to a squad reeling from a cup exit and a rival defeat. Pellegrini must treat each game with equal importance. He has the option to rotate Sterling and Bony upfront, but with the squad so stretched, Pellegrini could have to field close to the same 11 for the six games scheduled for the next three weeks. Rotation might have to go out of the window if City are to challenge on all fronts.