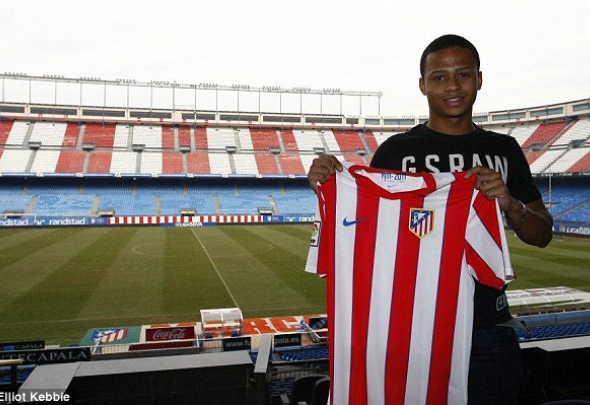 Former Leeds right-back Elliot Kebbie has gone from Atletico Madrid to Barnsley after signing a six-month contract at Oakwell.

The 21-year-old was a product of the academy system at Leeds’ illustrious Thorp Arch, and attracted interest from Europe’s biggest sides.

The defender also had a trial at Barcelona before signing with Diego Simeone’s Atletico.

Barnsley’s official website declared that Kebbie had signed with the League One promotion hopefuls ahead of a whole host of Championship clubs.

Kebbie, who can also play as a right-midfielder, failed to break into the Atleti first-team set-up after he was struck by a debilitating illness. In an interview with the Daily Mail last year, Kebbie revealed his struggle with the Epstein-Barr virus, which had him considering suicide.

Now fully recovered, Kebbie has signed for Barnsley and is keen to break into the first-team after moving from Salford City, who are owned by Manchester United’s class of ’92.

The youngster signed for Atleti at just 17, and is a long way away from the Vicente Calderon youth academy.

However, Kebbie was delighted to announce that he would be signing for The Reds and expressed this through his Twitter account.

I'd like to thank Paul Heckingbottom and all of his staff … but a special thanks to Bobby Hassell for ….(1/2) pic.twitter.com/xP7SD4xED8

… Rewarding my efforts with this incredible opportunity and I'm delighted to be a part of @bfc_official !! #barnsleyfc #football

The Leeds academy star played for the under-18 side at just 14 after signing with Leeds at just seven, and is known for his quick pace and is more than happy to get forward on the right-flank.

In other Leeds news, Lewis Cook has urged his new manager to stay at Bournemouth just days after signing.