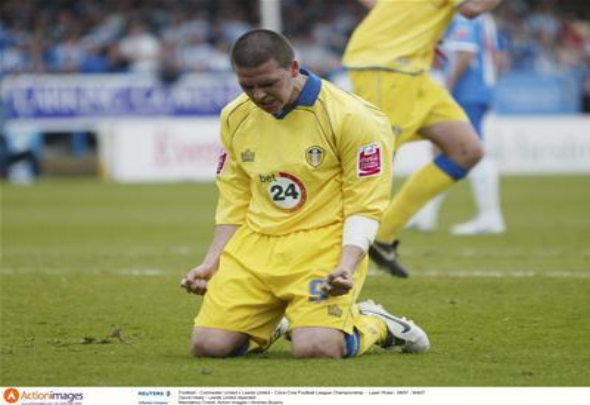 Popular forward David Healy endeared himself to the Elland Road crowd during his three years at Leeds, but where is he now? Football Insider investigates.

He was an instant success at the club and in his first 29 appearances for the team, he had scored seven goals. This made him the club’s joint top scorer alongside Brian Deane.

He then played a key role in the 2005-06 campaign, which saw Leeds make the play-off final, where they suffered a 3-0 defeat against Watford.

The Northern Ireland international again finished as the club’s top scorer with 14 strikes this time, and he again shared the accolade with team-mate Rob Hulse.

He eventually ended his stay with the club in 2007 following the club’s relegation to League One.

Healy finished as Leeds’ top scorer once again with ten goals and this earned him a move to Premier League Fulham for £1.5million.

The striker stayed at the Cottagers for just one year before moving back up north to Premier League rivals Sunderland.

However, his three-year spell in the north east did not go well and after loan spells at Ipswich and Doncaster he switched to Scotland giants Rangers in 2011.

Healy earned his only team career silverware at the Gers and played a part in the 2011 double winning side, which saw the Ibrox club claim the Scottish League Cup alongside the Premiership.

His association with Rangers ended with after one and a half seasons before heading down to League One side Bury.

He was looking for one last hurrah, but after just one goal in 19 appearances for the Greater Manchester side, he decided to hang up his boots.

Now, the former Leeds forward is in his first job in management with Northern Irish giants Linfield.

Healy became manager of the club in 2015 and his side are currently in second place in the Norther Ireland Premiership, five points behind Crusaders after 19 games.

In other Leeds news, three reasons why 25-year-old is the club’s unsung hero.