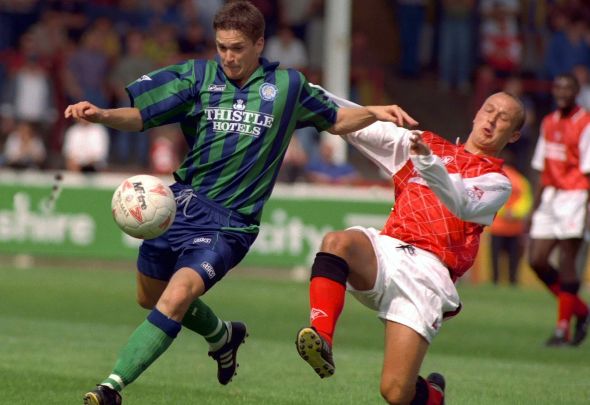 The 24-year-old has come under intense scrutiny this season after a slow start to the Championship season coincided with Leeds’ poor form.

However, the former Leicester striker has started to find the net on a more regular basis for the Yorkshire giants, who recorded their third win on the bounce ain the third round of the EFL Cup against Blackburn on Tuesday night.

Couzens, who played for Leeds during the 1990s for four years, claimed on his personal Twitter account that any striker would be happy with Wood’s haul of six goals in 10 games.

New Zealand captain Wood bundled the ball home from close range on Tuesday night to secure Leeds’ path to the fourth round of the EFL Cup in the 85th minute.

Wood has found the net against the likes of Sheffield Wednesday, Fulham and Fleetwood before scoring three goals in his last three games.

The goal also gave Garry Monk’s men their third win on the bounce, and Wood will be hoping his good form continues to coincide with Leeds’ results on Saturday as they host Mick McCarthy’s Ipswich Town.

Couzens, a Leeds academy graduate, made 37 appearances in all competitions for Leeds between 1993 and 1997, before moving on to play for the likes of Carlisle and Blackpool.

In other Leeds news, here are three things we have learned from Monk’s 1-0 triumph over Blackburn.