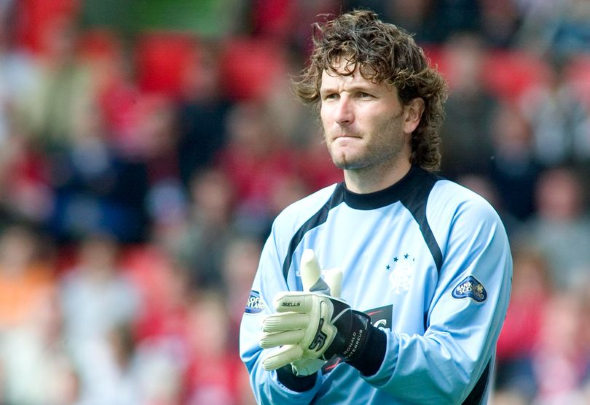 Former Rangers star Ronald Waterreus has shockingly revealed his Ibrox exit was down to the Ibrox giants spelling his name wrong in a fax – then getting his agent’s name wrong in a follow-up.
The Dutch international joined the Gers in 2005 after an injury to regular number one Stefan Klos and quickly established himself as first-choice as the Ibrox giants reached the knockout stage of the Champions League for the first time.
Waterreus left the Gers after 18 months after failing to agree an extension to his contract and returned to his homeland with AZ Alkmaar.
The seven-times capped international revealed he ended talks with the Gers over a new deal after a faxed contract offer misspelled the goalkeeper’s surname then got the player’s agents name wrong.
“Rangers sent me a contract offer by fax, but they had spelled my name wrong,” Waterreus told Dutch magazine Voetbal Inside, as translated by the Daily Record.
“So I angrily sent them a fax in reply, telling them: ‘If you can’t even spell my name properly …’
“They dutifully sent me another fax, which this time had my name spelt correctly. However, they still misspelt the name of my agent Kees Ploegsma on it. So I said: ‘I’m not talking with you any more!’
“I knew that I was going to leave Rangers. I had given an interview back home that was a bit spiky, and it was translated into English. We then played at home to Motherwell, and I was roundly booed by my own fans. That is no fun when there are 48,000 of them!”
Waterreus made 64 appearances for the Gers after joining from Manchester City and lifted the Scottish Premiership and Scottish League Cup during his time at Ibrox.
The Dutchman left after picking up an injury in his final game for the Light Blues and was replaced the following season by Frenchman Lionel Letizi as the newly appointed Paul Le Guen revamped the side he inherited from Alex McLeish.
After a short with AZ after leaving Ibrox, Waterreus joined MLS side New York Red Bulls for a season before retiring.
In other Rangers news, it can be revealed that a key first teamer has sensationally asked to leave after the board failed to stick to their promise of giving him a new deal during the transfer window.
Don’t miss out on breaking and exclusive Rangers news by clicking here for our brilliant 24/7 updates on Facebook, Instagram and YouTube.